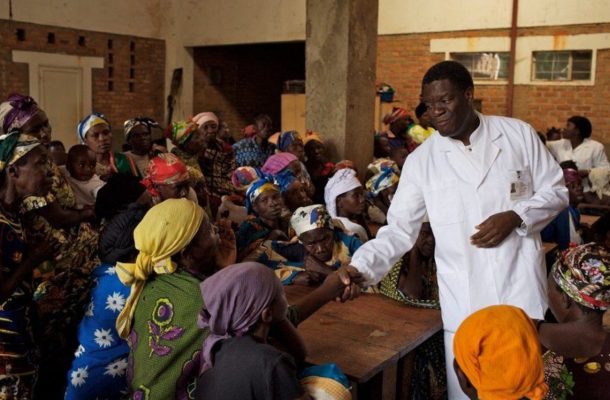 They have been awarded in their valiant efforts to end the use of sexual violence as a weapon of war, according to the Norwegian Nobel Committe.

"Mukwege is the foremost, most unifying symbol, both nationally and internationally, of the struggle to end sexual violence in war and armed conflicts," the statement said. "His basic principle is that justice is everyone’s business."

Mukwege, who is also known as the "rape surgeon" has dedicated a large part of his life working with victims of sexual violence in the Democratic Republic of Congo who suffer it at the hands of rebels.

Since the beginning of the civil war in the early 90s, Mukwege has assisted thousands of victims of rape and sexual abuse.

In 1999, Denis Mukwege established the Panzi hospital in the eastern city of Bukavu.

This was created with the goal of providing free and comprehensive care for female victims of rape and other forms of sexual violence during the conflict.

His hospital treats over 46,000 girls and women with gynaecological injuries, about half of them, victims of sexual violence.

The area is highly volatile, being constantly prowled on by armed groups who have often used sexual assault to terrorize civilians.

Although the Second War came to an end, violence, especially on civilians, remains extremely rampant.

U.N. Secretary-General Antonio Guterres said Friday that Mukwege has been "a fearless champion for the rights of women caught up in armed conflict who have suffered rape, exploitation and other horrific abuses. Despite regular threats to his life, he made the Panzi Hospital... a haven from mistreatment."

Mukwege, a past winner of the United Nations Human Rights Prize and the European Parliament’s Sakharov Prize, dedicated his Nobel award to all women affected by rape and sexual violence.

His work hasn't impressed many, particularly the authorities. He has on many occasions very vocal against the way government treats women who have suffered sexual abuse. He narrowly escaped an assassination attempt in 2012 that claimed the life of his guard who took the bullet in his place. He took the decision to go into exile, but returned a year later to a lively and enthusiastic welcome in order to make sure his hospital stayed open.

The other winner, Nadia Murad, is an advocate for the Yazidi minority in Iraq and for refugee and women’s rights in general. She was enslaved and raped by Islamic State fighters in Mosul, Iraq, in 2014. She has document the horrific experience she went through at the hands of ISIS.

Guterres said Friday that Murad's "powerful advocacy has touched people across the world and helped to establish a vitally important United Nations investigation of the harrowing crimes that she and so many others endured."

Her work as an advocate for the Yazidis, a persecuted religious minority in Iraq, helped to bring international attention to their plight and to secure the passing of a U.N. resolution last year to create a team to investigate ISIS crimes.
Credit: africanexponent