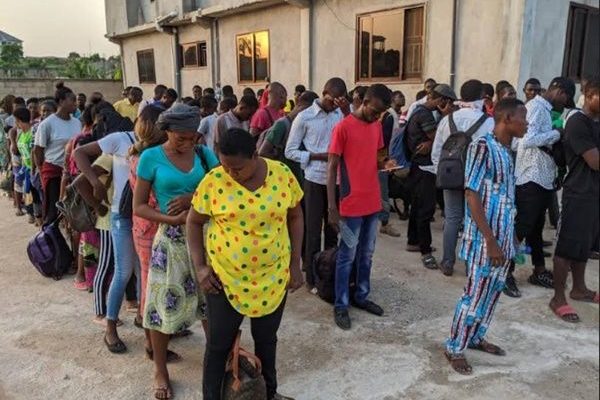 Ninety (90) Foreign Nationals who entered the country illegally have been arrested at Kenyasi Abirem in the Ashanti Region.

The 90, include 81 from Benin and nine Togolese nationals.

The group is made up of 22 females and 68 males and are being kept in isolation at the Atonsu Agogo Hospital.

They will be screened and investigated as well, according to officials.

Some parts of the country are under lockdown following the implementation of the Executive Order on the restrictions on movement in Greater Accra and Greater Kumasi, and Kasoa.

Following the passage of the Imposition of Restriction Bill 2020 in March, President Akufo-Addo announced a partial lockdown last week.

The two-week restriction on movement within the Kasoa township, Greater Accra Region and Greater Kumasi and some municipalities in the Ashanti Region, effective 1 am on Monday, 30 March 2020, is part of measures to prevent further spread of the deadly Coronavirus.

Essential service providers and some other business enterprises are however exempted from the lockdown.

But some are deliberately flouting the lockdown directive and have been seen going about their duties as in normal times.

HelloFM and PeaceFM's Senior Correspondent in the Ashanti Region, Sampson K. Nyamekye reports that the operation was led by Staff Sergeant Asamoah Isaac and other Military personnel from the headquarters of the Central Command of the Ghana Armed Forces attached to Kumasi Metropolitan Assembly for the lockdown exercise.