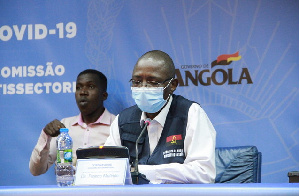 Angola has recorded seven new positive cases of local transmission of Coronavirus, bringing to 43 the total number of infections in the country since March this year.

With these new cases, the number of local transmissions in Angola reaches 16, without cases in the communities.

The new infections are direct contact cases associated with the cases 26 and 31. Four are Guinea-Conakry nationals and three Angolans.

According to the secretary of State for Public Health, Franco Mudinda, during the daily Covid-19 update briefing Friday evening, Angola remains with two deaths, 30 active patients in stable condition, and 11 recoveries.

As part of the effort to contain the spread of the Covid-19 pandemic, Angola is observing the third period of State of Emergency with effect from 00:00 on Sunday (26 April), going until 11:59 pm on 10 May, bringing the lockdown to 45 days in a row.

This is the second 15-day extension of the exception period in Angola, with some softening of the measures.

The State of Emergency was originally declared by the Head of State on 25 March, following a green light from the National Assembly (Parliament), and went from 27 March to 10 April.

Following the softening of the State of Emergency rules, circulation of people for commercial purposes remains allowed, while leisure movements are banned.

Circulation relaxation does not include Luanda as the sole province that has so far reported positive cases of Covid-19. Entry and exit from Luanda is banned.

Mandatory quarantine, both institutional and domestic, remains in place, as well as compulsory testing of people, it was said.