Countdown: how long will Algeria's Bouteflika hold onto power? 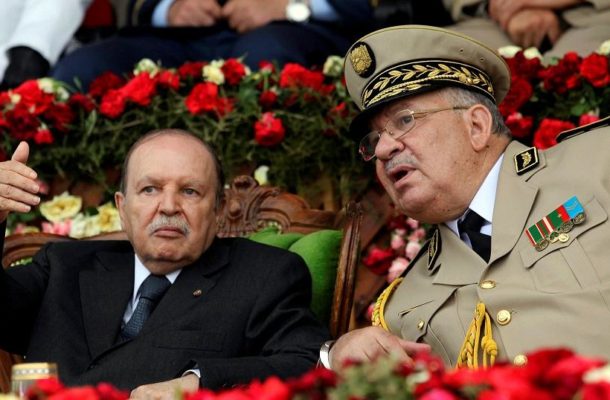 President Abdelaziz Bouteflika has been in power since 1999, when he won elections unopposed, after all six of his rivals withdrew from the race, citing fraud and intimidation.

Over the 20 years of his reign, Bouteflika has won three elections, implemented several reforms and enjoyed the backing of the army to help him govern the country.

Bouteflika suffered a stroke in 2013, that has left him physically unable to address the nation, only speaking to Algerians through letters.

His latest efforts to seek a fifth elective term have been met by resistance from Algerians, who have protested for several weeks, leading to concessions by the ruling party and Bouteflika himself.

In this article, we look at the loss of support for Bouteflika since he announced his decision to seek a fifth term on February 10.

“The Democratic National Rally recommends the resignation of President Abdelaziz Bouteflika according to the fourth paragraph of the article 102 of the constitution,” a statement from the party said.

Algeria’s powerful army chief of staff called on Tuesday for a constitutional move against Bouteflika, signalling an end to his 20-year rule.

Protesters on Wednesday rejected the army chief’s proposal to make a constitutional move against President Abdelaziz Bouteflika, adding demonstrations will continue until the political system changes.

“The implementation of the article 102 (of the constitution) means that the symbols of the system will oversee the transition period and organise presidential elections,” Mustapha Bouchachi, a lawyer and activist, who is one of the leaders of protesters told Reuters.

“Protests will continue… Algerians’ demands include a change of the political system,” Bouchachi added.

Protesters have repeatedly said they would reject any orchestrated succession or military interference in politics and want a transition which will lead to a government by consensus.

The army’s powerful chief of staff, Lieutenant General Ahmed Gaed Salah, told officers in a speech broadcast on Tuesday, that the solution to the biggest political crisis since the army cancelled elections in 1992 would be the exit of the president on health grounds.

Salah called on the country’s constitutional council to rule whether the president was fit for office. Such a ruling would have to be ratified by members of parliament’s lower and upper house by a two-thirds majority.

Based on the constitution’s Article 102, the chairman of parliament’s upper house, Abdelkader Bensalah, would serve as caretaker president for at least 45 days after Bouteflika’s departure.

While the military has praised protesters, it remains highly sensitive to any signs of instability and Salah has warned he will not allow the demonstrations to lead to chaos.

Algeria’s new deputy prime minister, Ramtane Lamamra said the government was responding to the legitimate demands of the Algerian people by;

The new prime minister, Noureddine Bedoui had also pledged to create an inclusive government of technocrats in a country dominated by veterans of the 1954-1962 war of independence against France, as well as the military and business tycoons.

Bowing to pressure from the protesters, Bouteflika announced that he would no longer seek a fifth term. He however stopped short of quitting as head of state, saying he would stay on until a new constitution is adopted.

Naming a new prime minister and government, Bouteflika also postponed the April 18 presidential elections. No new date was given.

Bouteflika’s campaign manager Abdelghani Zaalane told Ennahar TV the president had offered to step down after a year if re-elected.

In a statement read out on TV, Bouteflika said he would organise an election within the first year of a fifth term.

Protests soon erupted following Bouteflika’s decision to seek a fifth term. The protesters demanded, who started by demanding the withdrawal of Bouteflika’s candidacy have since called for an entire change of the political system.

READ MORE: Why Algerians continue to protest despite Bouteflika concession

The protesters have included lawyers, students and trade unionits among others.

In the past, Algerians had tolerated a political system that left little room for dissent as a price to pay for relative peace and stability.

Algeria is a leading member of OPEC and a top gas supplier to Europe, though so far oil and gas output appears unaffected by the unrest, an International Energy Agency (IEA) official said on Tuesday.

Algeria is also regarded by Western states as a partner in counter-terrorism, a significant military force in North Africa and a key diplomatic player in efforts to resolve crises in neighbouring Mali and Libya.Source: africanews.com