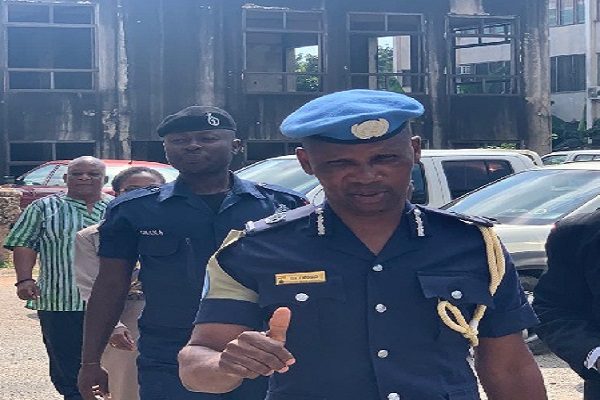 Assistant Commissioner of Police (ACP) in the centre of a controversial coup plot in Ghana, Dr. Benjamin Agordzo, has finally been granted a self recognizance bail by the Criminal High Court presided over by Justice Charles Ekow Baiden.

The Court pegged the bail at 500,000.00 Cedis. The Police Chief was also instructed to submit his passport to the Registrar of the High Court. He will also be required to present himself to the Inspector General of Police and the Director of BNI per the schedule presented in the ruling of the Court.

ACP Benjamin Agordzo is one of ten (10) persons charged for an attempted coup aimed at overthrowing the Akufo Addo administration.

Lawyer for the embattled senior police officer, Martin Kpebu at the last Court sitting on the 16th of January 2020 when he moved the bail application argued that his client was arrested on the 4th of November 2019, and has since been in Police custody till date. He further noted that Assistant Commissioner of Police (ACP), Benjamin Agordzo is a very senior police officer, he has a wife and children, and was therefore not a flight risk whatsoever. Again he indicated that the Police had finished their investigations and had no need to have him in custody to assist with same. Quoting from the judgment in the case of the Martin Kpebu versus Attorney General (No 2), lawyer Martin Kpebu said the Supreme Court held that the personal liberties of every person are priceless and that includes ACP Benjamin Agordzo.

The Prosecution led by Senior State Attorney Hilda Craig, indicated to the Court that the State was opposed to the application for bail for Assistant Commissioner of Police (ACP).

She argued that the offences of the Senior Police officer are serious and he should not be granted bail. She indicated that should he be granted bail, he could likely obstruct the judicial process by influencing possible witnesses of the state who are his juniors in the police service. The security agencies like the Police Service, according to the State Prosecutor, is a rank-based institution and Mr. Agordzo being an Assistant Commissioner of Police is likely to order all lower rank officers to him who are involved in the investigations to desist from same.

Justice Charles Ekow Baiden’s Court in its ruling this morning said it is his considered view that in the exercise of the discretion of the Court to grant bail, several facts must be considered irrespective of the nature of the case as per the laws of Ghana, all offences are bailable. ACP Benjamin Agordzo according to the Court raised very clear reasons why he should not be kept in custody and the State in its statement of opposition did not rebut any of the strong points raised by the senior Police Officer. According to the Court the State has not been able to prove that ACP Benjamin Agordzo will not make himself available to Stand trial, hinder police investigations, interfere with witnesses of the Prosecution or commit another offence if granted bail. The Court is, therefore, inclined to exercise its discretion in favour of the Applicant (Accused person) ACP Benjamin Agordzo.

The Court further ordered that the Registrar of the Court must personally serve copies of the orders of the Court on the Inspector General of Police and the Director of the Bureau of National Investigations (BNI).