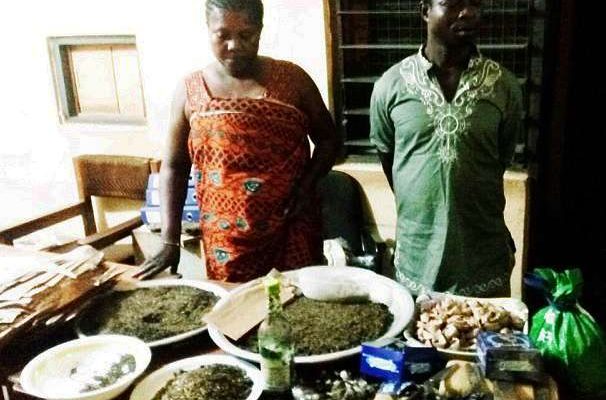 A dawn swoop by the Ashaiman Divisional Police Command on Friday led to the arrest of a couple accused of using cannabis (wee) in the preparation of light soup in their chop bar.

According to a Ghanaian Times report the couple who operate a drinking spot at New York in the Kpone Katamanso District were arrested for allegedly selling narcotic drugs to the public.

Their soup which is sold at the spot is popularly called “nkrampi or light sanja (wee light soup)" in the community.

This arrest comes a few months after the Police discovered that substances suspected to be Indian hemp are used in the preparation of toffees.

The operation which took place at 3:00 am was led by the Ashaiman Divisional Police Commander, Chief Superintendent Fleance Adika. It led to the arrest of the couple, Eric Semey,  37, and his wife, Agnes Nartey, 32.

A search conducted in their drinking spot and room revealed pots of soup, four compressed slabs and 112 wrappers and quantities of dried leaves suspected to be Indian hemp, 69 pieces of toffees and a bottle of drink all believed to have been prepared with narcotic drugs.

A pair of scissors, a knife, one cutlass, two packs of smoking filters, all believed to be used for the preparation of narcotic drugs for sale.

The  Ghanaian Times report also stated that the suspects are currently in the custody of the Ashaiman Police while investigations continue.