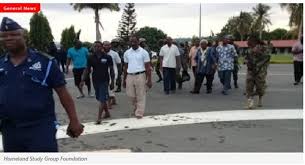 Ten members of the Homeland Study Group Foundation (HSGF) have been arrested in Tumu, Upper West Region for courting support from some traditional leaders up north for their declaration of the Volta Region as an independent state – Western Togoland.

They have been charged with treason.

The Prosecutor, D/Sgt. Martin K. Dagbortse, told the Wa Circuit Court presided over by His Worship, Baar Forson Agyapong, on 30 November 2019 that the group identifies itself as “the Western Togoland movement group” and organized a meeting to seek support on 29 November 2019 from the paramount chief of Wa, Naa Fuseina Pelpuo lV and his sub-chiefs but were driven out of the palace.

He said the police followed the activities of the group closely and arrested the members when they proceeded to the Tumu chief’s palace to seek support.

The suspects were then taken to the Upper West Regional police command after which they were arraigned before court.

His Worship Baar Forson Agyapong remanded the separatists to reappear in court on 9 December 2019 in order to allow the police to conduct further investigations.

The independence declaration of the Western Togoland was made by the 85-year-old leader of the HSGF, Mr Charles Kudzordzi, also known as Papavi Hogbedetor, at a public gathering of its adherents at the premises of the former Unity Rural Bank which is a few metres away from the Ho Police Training school.

Meanwhile, the group has said it has only retrieved lands stolen from its ancestors and done nothing wrong.

Ten members of the group were arrested by the Volta Regional Security Council on Tuesday, 19 November 2019.

Five of them were remanded on treason charges after being arraigned at the Ho District court on Wednesday, 20 November 2019. They include Peter Godfriend Edem, Mkpe Tornyi Kudjo, Kofi Agbeko, Agbenyega Akudzia and Ibrahim Tofa. They are to reappear in court on 4 December 2019.