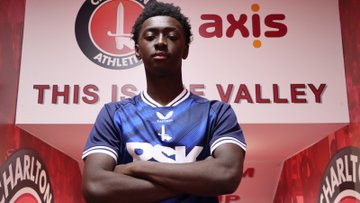 The youngster needs regular game time in order to aid his development as the U23 is not giving him the needed competition.

"It feels really good to be a Charlton player. I've been waiting a long time for this and I'm just thankful to God and thankful to everyone for making it happen. I'm excited to get started," Rak-Sakyi said.

"There were a lot of clubs interested but I chose Charlton because it's close to home, the fans are really good, the club has a big history and it gives a platform for young players to express themselves."
London-born Ghanaian teenager Jesurun Rak-Sakyi was named Crystal Palace’s Under-23 Player of the Season.

The forward was instrumental as he helped Palace finish fifth in the Premier League 2 Division 1, their first campaign in the top flight of Academy football.

But the 19-year-old winger made just two appearances for Crystal Palace in the English Premier League last season.

In between those appearances, Rak-Sakyi was in prolific form for the Eagles' U23 side.

He scored an impressive 19 goals and provided six assists in just 27 games for the U23s.

Rak-Sakyi joined Palace in 2019 from Chelsea and worked his way to being a regular for the Under-18 side in 2020/21, during which time he began to earn minutes with the Under-23s for his performances.

He has also been capped by England U20s and scored on his debut.