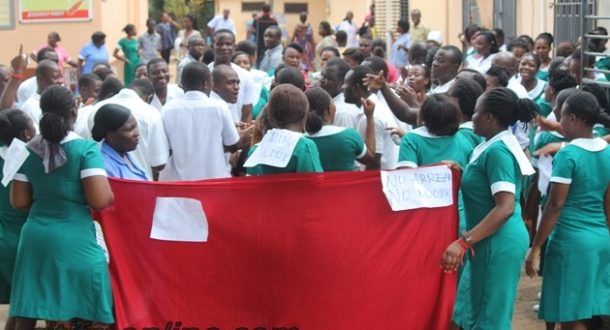 About 300 registered nurses and midwives in Damongo in the Northern Region, have laid down their tools in solidarity with an alleged assault on some of their colleagues.

Last Wednesday, three nurses were reportedly attacked and beaten by some youth in the area for reporting them to the police for stealing a motorbike belonging to one of the nurses. Even though law enforcement was able to retrieve the bike from the criminals, they subsequently ambushed the nurses and assaulted them in retaliation. Spokesperson for the Damongo nurses, Salifu Lukman insisted that, until these perpetrators are re-arrested, they will not return to work as their safety cannot be guaranteed. “The Health Services in the District have been shut down completely. There is no health facility, there is no clinic, there is no Health Centre that is working currently,” he said. Mr. Lukman revealed that, the nurses “had a meeting with the coordination director and some of the chiefs so they assured us of the security, but we are still maintaining that those guys are arrested not just because of the motorbike but the threat that they gave us… What we are saying is that, re-arrest them and we will go back to work.” “Tomorrow morning [Wednesday], we will be meeting our constituents and from there we will take a decision to whether we will reinforce the strike or suspend it.”