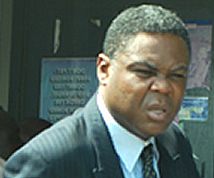 A private legal practitioner and member of the National Democratic Congress, David Annan has described as “hogwash”, the Centre for Democratic Development’s (CDD-Ghana) report which suggested that over 70% of Ghanaians believe Ghana is heading in the wrong direction.

The obviously livid David Annan who was a guest on Onua FM’s political talk show Ghana Dadwen, Wednesday said “We know where that Institution belongs, they are always releasing reports that are favourable to Nana Addo and the opposition NPP, just to please them, but we the NDC have always maintained that we will not accept any phony survey conducted by CDD, we will not, it is hogwash and we (referring to NDC) will not take them seriously.” The CDD-Ghana report is in sharp contrast to government’s position that the country’s economy is on sound footing. The survey which covered the period of July 2 to 18 from a sample size of 2,400 adult Ghanaians cutting across 163 districts and 291 towns and villages, indicated that Ghanaians are worried about their economic conditions which they argue might pose a threat to their existence. But David Annan did not just disagree with the report but dismissed it as a propaganda tool against the government. He questioned why the report did not state the specific districts that the survey was carried out, throwing challenge to CDD-Ghana to tell Ghanaians why they have decided to shelf the details but chose to release a report that is untrue. “What are they hiding, I said what is the CDD hiding that they cannot tell us exactly the districts they have been to, at least all of us in this studio have no idea where and where they have covered, so I am asking why, is it not because CDD wants to throw this false report out there to show that nothing is happening.” David Annan posited that nothing will persuade Ghanaians to buy into what he called an agenda by the CDD-Ghana and some media outlets to oust the government. “The President, His Excellency John Dramani Mahama has steered the affairs of this country in the right direction and that is a fact, after the elections people like CDD-Ghana will realize that Ghanaians are well awake and they cannot be deceived by such propaganda report,” he said.