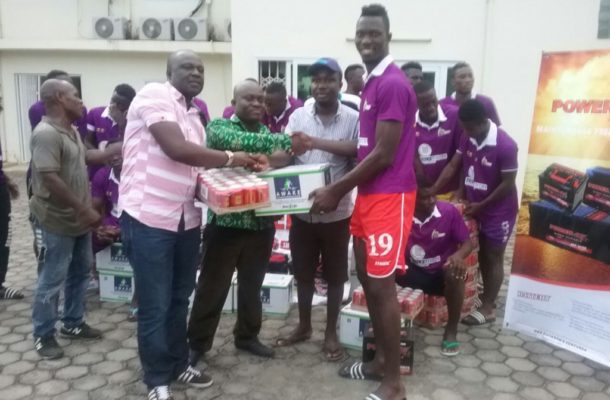 Ahead of the titanic with TP Mazembe in the Caf Confederation Cup, De Rockson Ventures, distributors of Power Jet Car Battery in Ghana have donated items to Medeama SC on Friday 12th August, 2016 at the team's Hotel base at Kojokrom.

The presentation was done by Mr. Stephen Pienaar (Sir Stone) an official of company and Mr. Benjamin Nana Yeboah the regional representative.

The items were received by the captain of the club Muntari Tagoe.

The Western Regional representative of De Rockson Ventures, Benjamin Nana Yeboah on behalf of the C.E.O Mr. Daniel Rockson said the presentation is meant to motivate the team ahead of the game on Sunday.