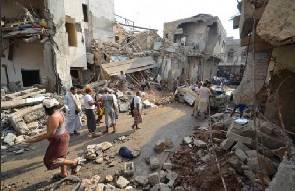 The death toll from an Arab coalition air strike which hit a house in a residential area in western Yemen has risen to 26 people, medics and residents said on Thursday.

A spokesman for the Saudi-led alliance was not immediately available for comment on the strike, the latest in a string of deadly raids that have killed civilians.

The coalition, which began operations in Yemen in March last year to try to reverse the rise to power of the Iran-allied Houthis movement, says it does not target civilians.

Alliance fighter jets launched missiles on Wednesday at a residential neighborhood in the Red Sea port city of Hodeidah where Houthi leaders were staying, a resident and medical workers in the Houthi-controled area told Reuters.

The raid hit a house in a neighborhood populated by workers, according to medical services and local officials. Apart from those killed, 60 others were wounded, they said.

The deputy governor of Hodeidah province, Hashim Azazi, had earlier put the death toll at 19 civilians, but said rescue workers were still pulling victims out of the rubble.

A Houthi leader, Ali al-Amad, said in a Tweet he had survived a raid on the presidential palace.

U.N.-sponsored talks to try to end the fighting that has killed more than 10,000 people collapsed in failure last month and the Houthi movement and allied forces loyal to former president Ali Abdullah Saleh resumed shelling into neighboring Saudi Arabia.

Hundreds have been killed in strikes that have hit schools, hospitals, markets and private homes. Nearly half of Yemen's 22 provinces are on the verge of famine, according to the U.N. World Food Program, as a result of the war that has drawn in regional rivals Iran and Saudi Arabia.