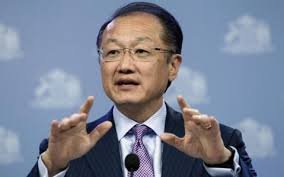 Amid U.S.-China trade tensions and high levels of debt faced by low income countries, one message is clear, the president of the World Bank Group said on Thursday: Trade is important for the poor.

Speaking to CNBC on Thursday at the IMF and World Bank annual meetings in Bali, Indonesia, Jim Yong Kim said that the World Bank is trying to get the message across that trade is critical.

"We are trying to put evidence on the table which says trade is critical if we want to end extreme poverty," he said. "Evidence is simply: We are here to end poverty; trade is important for that."

Currently, he said, there are risks from trade growth going down and many low income countries becoming more indebted.

Kim added: "On the other hand, the message we are trying to give here is: Let's do everything we can to prepare for whatever trade tensions might exist. We're preparing developing countries that are in the midst of trying to understand what will happen to those trade tensions."

What those countries need to do is "very clear," he said: "They need to get their fiscal house in order, they need to have monetary policy that makes sense, and that doesn't try to manipulate currencies."

Commenting at a Thursday news conference, Kim said he is very concerned about the trade tensions between China and the United States and warned of a clear hit to global growth if all countries escalated their tariff threats.

He added that more study is needed to understand the effects of trade war on countries that supply goods and services to China.

Generally, the World Bank believes "very much in the importance of independent central banks," Kim said, responding to a question from CNBC's Geoff Cutmore about whether U.S. President Donald Trump repeatedly attacking the U.S. Federal Reserve has undermined business confidence.

The American leader knocked the Fed on Wednesday for continuing to raise interest rates despite some recent market turbulence. He said "the Fed has gone crazy."

Kim stressed that the World Bank is watching "very carefully" what's happening with the U.S. dollar, as there are many developing countries with very high dollar-based debt.

"If a large economy ... has high dollar-denominated debt, if it gets into trouble, the spillover effects could be quite substantial. So we don't try to make recommendations about monetary policy, but we follow it closely, and try to prepare our finance to respond, and to survive whatever the outcome might be."