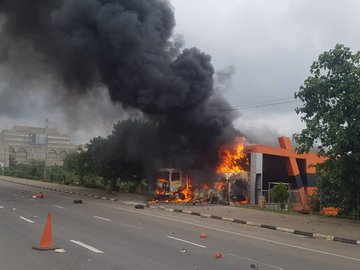 A Deputy Commissioner of police in charge of Operations, DCP Umar was shot dead in the cross fire between police officers and protesting members of the Islamic Movement of Nigeria aka Shi'ites in Abuja, Nigeria.

A reporter with the channels who was in the bus was hit by a bullet in his stomach.

He is currently being treated at an undisclosed hospital.

Umar was reportedly shot dead while trying to calm the fraying nerves of the Shi'ites who had disrupted activities at the Central Business Disrict in Abuja.

He was rushed to a closeby hospital where he died.

A source in the FCT command who confirmed the demise of the Deputy Commissioner to Punch,  said:

“The DCP was a very good man. We were at the mosque last Friday when he saw one man looking so haggard. The man told him how he had not been paid for over 14 months because he was unable to complete his IPPIS (Integrated Payroll and Personnel Information.)

“On hearing that the man was an Inspector, DCP Umar hugged him and immediately made calls to the officers in charge of the platform and the budget office. Today, the Inspector has been directed to come to the IPPIS office for enrollment on the platform. His death is so shocking.”