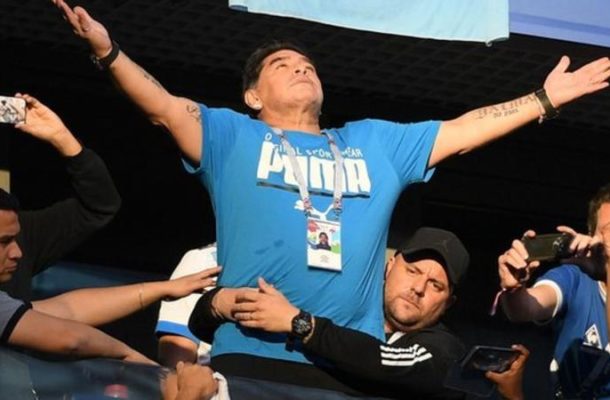 Argentina legend Diego Maradona said he was "fine" after being seen by a doctor during the team's World Cup victory over Nigeria on Tuesday.
The 57-year-old, who captained Argentina to World Cup victory in 1986, said his "neck hurt a lot".

Maradona posted a picture on social media showing medical staff with him at half-time of the 2-1 victory, but denied he had been taken to hospital.

"I was checked by a doctor and he recommended me to go home before the second half, but I wanted to stay because we were risking it all. How could I leave?"

Argentina's victory meant they reached the last 16, where they will face France on Saturday.

Video posted online appeared to show Maradona struggling to get up from his seat at full-time but BBC Sport has learned he later boarded a flight back to Moscow.

Earlier, he was in tears when the score was 1-1, which would have resulted in Argentina's elimination.

Then, after Marcos Rojo scored the team's late winner, he was seen giving one-fingered gestures.

Maradona played 91 times for Argentina, scoring 34 goals, and later managed the national side.

'He enjoys being a parody of himself'

Diego is a really high-energy guy and has always been that way. When I was with him in the '80s and '90s, he was high on life but his problem at the moment is he doesn't sleep so he takes these sleeping pills and if he interacts with other substances during the day, such as alcohol, it has an effect on him.

He quite enjoys being a parody of himself at times. I understand why people criticise him but in his heart he's a warm, caring guy.

I just hope he one day doesn't do something stupidly excessive and something silly happens. He's an embodiment of living life.