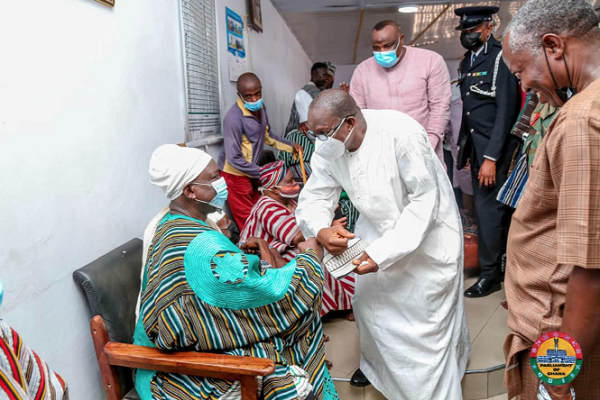 The Paramount Chief of the Wala Traditional Area, Naa Fuseini Seidu Pelpuo IV, has urged the Speaker of Parliament, Mr Alban Sumana Kingsford Bagbin, to discharge his responsibilities above reproach.

"Your sterling performance in Parliament ever since you took your seat in that august House has left no one in doubt about your suitability for the position of Speaker of Parliament. Your success story is one of commitment, hard work and unalloyed patriotism," Naa Pelpuo said.

Mr Bagbin paid a courtesy call on the revered traditional ruler at his palace in Wa in the Upper West Region yesterday as he made a return to the region after his famous election as Speaker of the eighth Parliament on January 7, this year.

Mr Bagbin, a native of Sombo in the Nadowli-Kaleo District, is on a three-day visit to his native region, where he served as the  Member of Parliament (MP) for Nadowli-Kaleo for seven straight terms before voluntarily quitting as the last Parliament exited on January 6, this year.

His entry into Wa was elevated to his status as the third in command in the governance structure of the country, with state security and a motorcade announcing his arrival in the manner usually associated with Presidential convoys.

He is expected to meet the various levels of NDC executives and heads of religious bodies and attend a thanksgiving service.

During the interaction with the Wa Naa, Naa Pelpuo admonished MPs to put aside their partisan considerations during deliberations in Parliament to ensure that the country achieved its desired development goals.

Mr Bagbin had been the MP for Nadowli-Kaleo since the inception of the Fourth Republic in 1993 until he decided not to seek re-election to the eighth Parliament.

On January 7, 2021, he was proposed for the speakership position by the NDC caucus in Parliament and he won against the candidate of the governing NPP, Prof Mike Oquaye, who was the Speaker of the previous Parliament.

Naa Pelpuo said the people of the area were proud of Mr Bagbin and would always rally behind him in all of his endeavours to ensure that he excelled.

He said it was necessary to improve those facilities because of the high number of senior high school graduates who must be assured of placement in tertiary institutions.

Mr Bagbin said his visit was to express his gratitude to the people for supporting him wholeheartedly and for also ensuring that he maintained his seat in Parliament for 28 years without blemish.

He said without their support, he could not have attained the standing he had achieved, particularly where he had ended up at the apex position of Parliament.

The Upper West Regional Minister, Dr Hafiz Bin Salih, expressed confidence in the Speaker of Parliament to deliver to the satisfaction of Ghanaians.

He noted that Mr Bagbin’s long experience and exposure in Parliament made him well suited to discharge his new role to ensure smooth business in the Legislature.

He assured Mr Bagbin that the people of the region would always stand solidly behind him.