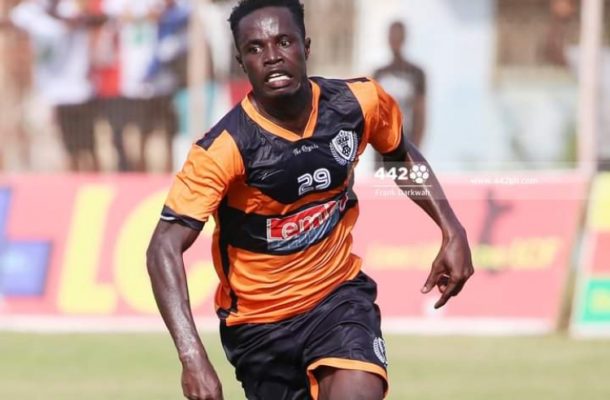 Legon Cities have announced that striker Nicholas Gyan has departed the club with immediate effect after an uneventful spell.

Both parties have mutually terminated their contract barely eight months after the player signed for Legon Cities as a free agent.

Nicholas Gyan formerly of Ebusua Dwarfs joined the Ghana Premier League side on a free transfer at the beginning of the 2020/2021 season.

The 31 year old striker has been a bit part player at the club since joining the club and held discussions with the management of the team to terminate the contract.

An official statement from the read: “The club has received your letter dated the 8th February 2021 and acknowledge its content as such.

“As per the contract signed between the two parties, there are clearly stated clauses of termination that is binding on both parties. We refer to you the clauses states in the agreement(contract) on the inception of your relationship with the club, herein being clauses 14.1 – 14.5.”

“In line with the stated clauses, we mutually (club and player) come to a closure of the contract and wish you the very best for the future”

He last played for Tanzanian side Azam FC in 2019 after leaving Ebusua Dwarfs.

Gyan made only two appearances for Legon Cities in the current season in the Ghana Premier League.