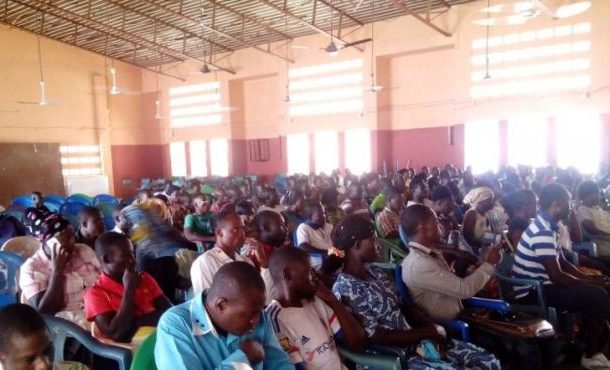 An extraordinary outpouring of grief has engulfed the Upper East region over some reported untimely deaths of a number of disappointed clients of the DKM Microfinance Company.

Surviving clients, organised into a group called “Aggrieved Customers of DKM in Upper East” and numbered around 6,000 or about 0.6% of the region's population, assembled Wednesday in renewed open protests, describing the shutdown of the company as a “national disaster”.

The devastated investors travelled from across the region to Bolgatanga, the regional capital, wearing blazing red bands at a news conference and showing a depth of fury and trauma comparable only to the flaming wrath and misery of hell. About 1,400 people alone are said to have invested Gh¢11, 829, 371 at DKM in the region.

Addressing their grievances to President John Dramani Mahama, the Chairman of the aggrieved group, Charles Ayambire, spoke very strongly, saying: “Nothing matters to us at this very moment than our DKM principal deposits because we are suffering at the grassroots. Our businesses have collapsed; we are unable to send our children to school; our marriages are dissolving every now and then; people continue to commit suicide; others die through frustration and depression.”

He added: “We know His Excellency, the President of Ghana, Members of Parliament and the Bank of Ghana are all convinced that the DKM case is as a result of regulatory failure and so we expect that DKM issue is treated as a national disaster that needs immediate attention. The Bank of Ghana should, therefore, pay us upfront so that they take steps to liquidate the assets.”

Customers vow to vote “massively” against Mahama
The Bank of Ghana (BoG) shut down the company on Monday May 11, 2015, after it reportedly failed to comply with the terms and conditions required in its licence and also for purportedly possessing assets deemed too insufficient to meet its responsibilities to investors.

A cross-section of the aggrieved clients at the news conference

Traumatised depositors across the country have blamed the BoG for alleged failure to ascertain the capabilities of the company from the onset before granting it licence to operate. Whilst they have sustained their anger particularly against the immediate-past Governor of the BoG, Dr. Henry Kofi Wampah, for causing “the mess”, the disappointed accountholders also have slammed President Mahama, under whose government the disaster struck suddenly, for taking too long to resolve their grievances “despite the several promises” he made.

Taking turns to pour out their frustrations at the news conference, the customers vowed to vote massively against the ruling government at this year's general elections.

“What are our leaders doing? We voted for them! We kept them there to see to it that we live in happiness! But here is the case we are suffering. We are languishing in poverty and yet nothing is done about that. We were told that our monies would be paid. Up to now we have not had one penny. If they are not paying anything, we are going to advise ourselves accordingly.

“We will not just sit down here and allow our monies to go. Whatever means we would take to get our monies back, we shall do it. If the President is not doing anything about it, we shall advise ourselves. December 7, there shall be elections. We shall vote massively to change the government of the day! We are not joking here. People are dying. People are lying in the hospitals. People are suffering. Some have been evicted from their homes,” Raymond Anaba Ayine fumed as his exhausted voice drowned in thunderous applause from a defrauded-looking crowd.

DKM disaster to affect voter turnout
Meanwhile, a number of the grieving customers have announced they will stay away from the upcoming general elections in protest over their withheld investments.

With more than a half of about 6,000 enraged customers harbouring plans to boycott the December polls, voter turnout equally may be heading for some disappointing figures.

Rita Azure, a trader with two children, ranted at the news conference: “We invested these monies so that we can take care of our families. And here is the case we don't have the money to even feed let alone to pay their school fees. Some of our children have dropped out of school. We are suffering. Do something; if not, no money, no vote. We are not going to vote. The whole Upper East, no vote. Many people are dead and many are on their sickbed because of this. Mr. President, pay our money to us because the Bank of Ghana is under you!”

“Due to DKM, some of us are not able to pay our school fees. Some of us are breadwinners of our families. We are not able to give money so that they will take care of our [siblings] or family members. Mr. President, if our monies are not released, come December 2016, nobody will vote!” Rita Alemya, a teacher trainee, cried out as the frustrated crowd groaned even louder.