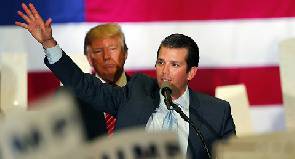 But a super-charged presidential race can be an unforgiving entry point to national politics. For Donald Jr., the intensifying scrutiny has at times -- in particular over the past two weeks -- revealed a propensity for damaging missteps.

Still, the campaign insists Trump Jr. has been "a tremendous asset" all the way through.

"Speaking the truth might upset those who would rather be politically correct than safe," Trump campaign spokesman Jason Miller told CNN in an email. "But the American people want a change, and only Donald Trump will do what's needed to protect us."

Here are a few of the things Trump Jr. has done of late:

"If I had a bowl of skittles and I told you just three would kill you. Would you take a handful? That's our Syrian refugee problem."

At least, that's how Donald Trump Jr., among others, would describe it. While many Trump supporters chimed in to agree, the tweet provoked a broader backlash. Mars Candy eventually chimed in to distance themselves from the message.

"Skittles are candy; refugees are people," the company said in a statement. "It's an inappropriate analogy. We respectfully refrain from further comment, as that could be misinterpreted as marketing."

According to a recent Cato Institute report, the odds "that an American would be killed in a terrorist attack committed by a refugee was 1 in 3.64 billion a year."

As Bump explains, the tweet could -- with the framing only slightly altered -- be interpreted as an argument for letting in more refugees.

Gave a new reason why Trump hasn't shared his taxes

Donald Trump is on track to be the first modern presidential candidate withhold his tax information. The candidate and the campaign have for months said their reason for keeping a lid on the returns was an ongoing audit.

But in an interview last week with the Pittsburgh Tribune-Review, Trump Jr. gave a very different explanation.

The decision was made, he said, because Trump has "got a 12,000-page tax return that would create ... financial auditors out of every person in the country," and have them "asking questions that would distract from (his father's) main message."

While there is no law preventing Trump from making the returns public, audit or not, Trump Jr.'s comment reflected what critics have been saying for months: that this is and always has been a political calculation.

Complaining about media coverage is part of almost every campaign's playbook. References to "the gas chamber" are not.

During an interview with Philadelphia-based conservative talk radio host Chris Stigall, he first described the press as the Clinton campaign's "number one surrogate."

But then, this: "They've let her slide on every indiscrepancy (sic), on every lie, on every DNC game trying to get Bernie Sanders out of the thing. I mean, if Republicans were doing that, they'd be warming up the gas chamber right now. It's a very different system -- there's nothing fair about it."

The campaign denied that Trump Jr. was making a Holocaust reference -- the Nazis used gas chambers as a tool of their World War II-era genocide -- and that the comment, a bit of hyperbole, was really about capital punishment more generally.

"The liberal, dishonest media is so quick to attack one of the Trumps that they never let the truth get in the way of a good smear," Trump spokesman Jason Miller said in a statement.

The Anti-Defamation League, a prominent Jewish advocacy group, was less sure.

"Trivialization of the Holocaust and gas chambers is NEVER okay," they tweeted at Trump Jr.

Clinton's campaign was especially biting, turning its response into an attack on Trump the candidate, with chairman John Podesta saying the son's language is "probably pretty consistent with the type of rhetoric he heard around the house growing up."

Posting image of alt-right mascot 'Pepe the Frog' with Trump

As Clinton was feeling the fallout from her "basket of deplorables" comment -- in which she initially suggested that half of Trump's supporters fit in a group composed of the "racist, sexist, homophobic, xenophobic, Islamaphobic, you name it" -- Trump Jr. made headlines with a controversial Instagram post.

The photoshop composition featured his father leading a band of "deplorables," with political allies and the cartoon "Pepe the Frog" by his side. What Trump Jr. later said he did not know, was that "Pepe" has been appropriated as a mascot and preferred meme of the white supremacist alt-right movement.

Asked about the post by ABC News on Sunday, Trump Jr. pleaded ignorance.

"I've never even heard of Pepe the Frog," he said. "I had no idea there was any connotation there."

His father's feed might get more attention, but Trump Jr. is just as active -- and sometimes more controversial.

"What is wrong with her?" Woods asked in a recent tweet, shared by Trump Jr., that quoted another user who wrote: "BREAKING!!! Collapsing Hillary Clinton Heavily Sedated as she responds to Donald Trump comment & #Chelsea !! #Valium"

After a recent NBC News forum, Trump Jr. retweeted a post from right wing radio host John Cardillo, who was among the conspiracy theorists saying Clinton had been wearing an earpiece during the event.

Shared some choice thoughts on a 'herd of mothers'

A look back at Trump Jr. in the pre-campaign days yielded some tasteless commentary on motherhood and a family employee.

"Ever notice that if u get a herd of mothers together they aren't physically capable of talking about anything but birth pregnancy & diapers?" he asked in July 2011.

About a year later, he offered this gem on the devotion of a particular employee, who Trump Jr. said skipped a family wedding to be at work.

"At dinner w our greenskeeper who missed his sister's wedding 2 work (luv loyalty 2 us) "No big deal hopefully she'll have another someday";)" Trump Jr. tweeted.