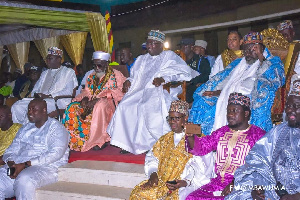 The Vice President noted that Islam has no place for violence

The Vice President Dr. Mahamudu Bawumia has admonished the youth in Zongo communities not to allow themselves to be used by desperate politicians to perpetuate political violence in the country.

Addressing thousands of Muslims during the 52nd Annual commemoration of the birth of Prophet Muhammad by the Tijaaniya Muslims of Ghana in Kumasi last night, Dr. Bawumia said as the nation gears up for the December elections, politicians with evil intentions have already started threatening mayhem, adding that Zongo youth should reject the lure of such politicians who will turn to them with the aim of recruiting them to perpetuate election-related violence.

“Let's say no to politicians who don't care about us and only need us when they want our energetic youth to go and snatch ballot boxes and perpetuate electoral violence. The only legacies such politicians leave for our youth and community are disgrace, broken legs, tragedies, imprisonment, joblessness, etc."

The Vice President noted that Islam has no place for violence, and the Zongos are generally peaceful places. He added, however, that the misbehaviour of a few misguided youth from the Zongos has often led to negative branding. He therefore, urged Muslims and residents of Zongo in general to stand up against plotters and perpetrators of electoral violence to help maintain the peace in the country.

“Fellow Muslims, as Ghana prepares for another general election, it is important for all Muslims to play a role towards maintaining the peace Allah has bestowed on this country,” Dr. Bawumia urged.

“Due to the misbehaviour of a few misguided ones among us, extremism and political violence are often associated with our youth in the Zongos. Fellow Muslims, violence has no place in Islam, and under no circumstance, should a Muslim perpetuate violence himself , or be recruited to perpetuate political violence or any form of attacks by political miscreants.

While reiterating government's commitment to protect the country's peace, he also urged members of society to be on the look out for people with intentions to harm the peace of the country.

“The Almighty Allah has blessed this country with peace, and under no circumstance should we allow politicians who are desperate to use elections to disintegrate this beautiful country.

"That won't happen! The government of President Akufo-Addo has a responsibility to protect this country and it will not countenance acts by anybody, including politicians, which will threaten the peace we enjoy in our country,” Dr. Bawumia warned.

“As the government reiterates its commitment to protect the peace in the country throughout the election process, it is incumbent on all members of society, to fish out and expose desperate politicians with evil intentions. By their divisive and violent utterances, we shall know their bad intentions.”