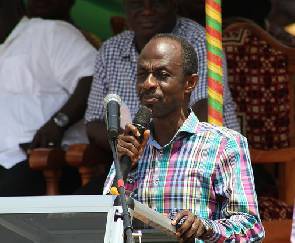 The General Secretary of the ruling National Democratic Congress (NDC) Johnson Asiedu Nketiah has said the party will not waste its time waiting to copy ideas from the opposition New Patriotic Party (NPP), which he describes as losers.

The largest opposition party has stated that it is not in a hurry to launch its 2016 manifesto ahead of the December general elections to avoid the ruling National Democratic Congress (NDC) plagiarising their ideas.

The NPP has accused the NDC of copying their ideas in the past but have they will not give them the room to operate this time around.

The ‘Elephant party’ has alleged that the NDC twist ideas in NPP’s manifesto thereby making it their own, hence their decision to delay the launching of their manifesto.
 
Barely three months to the crucial elections, both parties are yet to launch their manifestos though they have indicated it will be in the Month of September.

Speaking at the Launch of an election task-force in the Volta Region, Mr John Asiedu Nketiah aka General Mosquito, dismissed claims that the NDC delayed its manifesto launch to steal ideas from the NPP, adding that the party doesn’t steal from losers.

“I have heard so many people saying that the NDC are waiting for the NPP before we release our manifesto. Tell them that we don’t learn from losers, we set the pace for them to copy. We go according to our own plans. We have selected our candidates, we are the only party now that has the full compliments of presidential candidate and running mate and 275 Parliamentary candidates.”