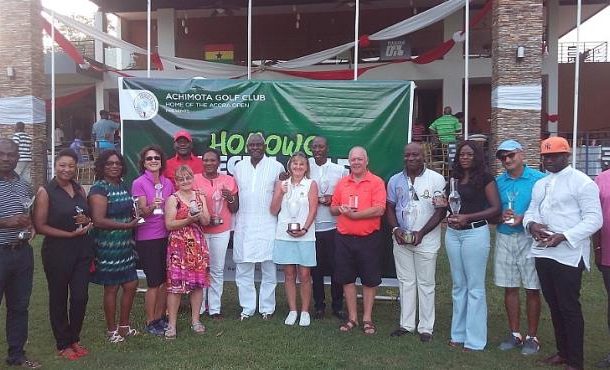 The event which took a nose dive for close to five years bounced back in style; attracting the heavy presence of the Osu Mantse, Nii Kinka Dowuona VI and other seasoned golfers from across the country.

Coincidentally and playing to a single handicap of nine, Club captain Frank Adu Jnr., recorded an impressive net score of 71 to lift the ultimate in the Men's Group A category.

The captain, who is also the Managing Director of Cal Bank, now playing to a new handicap of eight beat Tony Mintah by just a stroke who in turn beat Emmanuel Quarcoo by two strokes.

A 67 net was enough to deliver the top most prize in the men's Group to Kwadwo Amponsah who beat Jingak Chung on count back. Amin Manekia followed in third position with 68 net.

Lynn Mitchell shot 69 net to rein in the ladies A segment, while Elizabeth Aku Yabah and Mary Prempeh trailed with net scores of 72 and 73 respectively.

It was Christine Furler (75net) who dominated the Ladies B event, while Achiimota Lady Captain Peace Akwei and Mariatu Bah, followed with 86 and 91 net respectively.

Adu Jnr., commended Eddie Addo and his team of organizers highly for re-instituting the tournament after five years.

He commended Special Guests, Osu Mantse and his spouse as well as   participants for turning up in their numbers to grace the event.