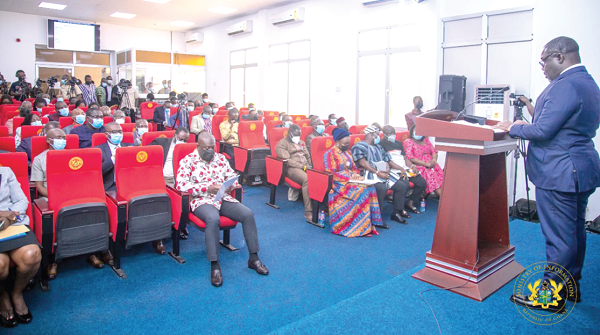 The Driver and Vehicle Licensing Authority (DVLA) has completed the first two phases of the digitalisation of records from 1995 to 2019.

The third phase, covering 2019 to 2021, is ongoing, the Minister of Transport, Mr Kwaku Ofori Asiamah, has said.

He was speaking at the Meet-the-Press series, an initiative by the Ministry of Information for all ministers to update the public on developments in their respective sectors.

At yesterday's series, the minister gave updates on projects and programmes being undertaken in the road transport services, aviation and maritime inland waterways sub-sectors.

On the road transport sector, he said the government prioritised road safety education as part of measures to curb the increasing spate of road crashes in the country.

He said in line with that, the National Road Safety Authority (NRSA) had printed and distributed 270,000 road safety materials and carried out 1,175 television and radio programmes.

"In addition, a refresher training programme has also been organised for 13,000 commercial vehicle drivers to sharpen their skills," Mr Asiamah added.

He said the government also carried out a fleet renewal programme to promote road-based mass transportation services and improve rural-urban and peri-urban linkages.

"As part of this programme, the government supplied 200 buses for use by the Metro Mass Transit Limited (MMTL) and the Intercity STC Coaches Limited," he said.

He said a contract had been signed for the supply of an additional 100 intercity buses for the MMTL.

On the aviation sector, Mr Asiamah said expansion works were being carried out at some airports, adding that phases two and three of the Kumasi Airport project were 92 and 37.80 per cent, respectively, complete.

He said the Tamale Airport phase two project was also 72 per cent complete, while the rehabilitation of the Sunyani Airport was almost completed.

The minister further said major infrastructural projects had been initiated to boost water transportation and trade.

They included the development of four berths and dedicated container terminals at the Tema Port and a multipurpose berth at the Takoradi Port to decongest and expand existing port infrastructure.

According to Mr Asiamah, feasibility studies had also been completed on the Keta Port project in the Volta Region.

He said 12 coastal fishing landing sites had been developed in the country, including the Central Region.

The minister said there had been the removal of tree stumps from the Volta Lake to facilitate water transportation and curb accidents.

For instance, he said, tree stumps had been removed from major navigation routes such as Dambai-Dambai overbank, Yeji-Makango and Yeji-Aworjekope.