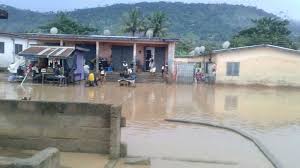 Residents of the Koforidua Sabon Zongo have been displaced by a heavy downpour that occurred in the area earlier today.

Over forty residents in the area are are worried as the rains has destroyed most of their properties.

According to Abdul Aziz, a resident of the area, the rains have left the individuals who stay around in a bad state.

"I just arrived from Togo and decided to visit my sister and discovered that they have been left in a terrible state by the downpour, I doubt the the residents can pass the night in this current state" He said.

He further added that the although no one has been reportedly dead or carried away by the downpour, the homes and rooms of the residents were filled to knee levels in some houses due poor drainage in the locality.