E-transmission will be credible - Charlotte Osei 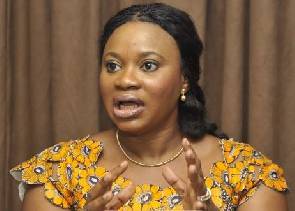 The Chairperson for the Electoral Commission, Charlotte Osei has pooh-poohed suggestions that the introduction of the Electronic Results Transmission System (ERTS) for the 2016 elections is irrelevant.

The opposition New Patriotic Party (NPP) had criticized the EC’s decision to electronically transmit results in the December polls, saying the process fails to address the critical challenges that the reform process seeks to overcome.

The NPP’s 2016 Campaign Manager, Peter Mac Manu, who raised concerns about the process had said the electronic transmission failed in other countries including Kenya, Ecuador and Mexico,hence should not be adopted in Ghana.
But speaking on Metro TV’s Good Evening Ghana, Madam Osei defended the EC’s decision to resort to e-transmission, saying the move forms part of the electoral reforms proposed after the 2012 elections.

“After the 2012 elections, as you know, we set up the Elections Reform committee. One of the recommendations was that we should have the electronic transmission of results. Now it does not replace the manual system that we have. That is the process under the law but we are introducing the election results which enables us at head office to see scanned copies of the results,” she said.

Madam Osei also assured Ghanaians that the e- transmission will be transparent and credible, saying, those manual results are the same ones that will be scanned and sent to us.”

Charlotte Osei further highlighted the processes the EC had to go through to contract IT companies for the e-transmission, saying “we started from 17 companies that expressed an interest when we advertised the process in March in the newspapers. We’re down to two companies now doing the demonstration and it’s a 3-day process. It will end tomorrow and we will select one. They will be responsible for transmitting 29,000 polling station results and 275 collation centre results.”