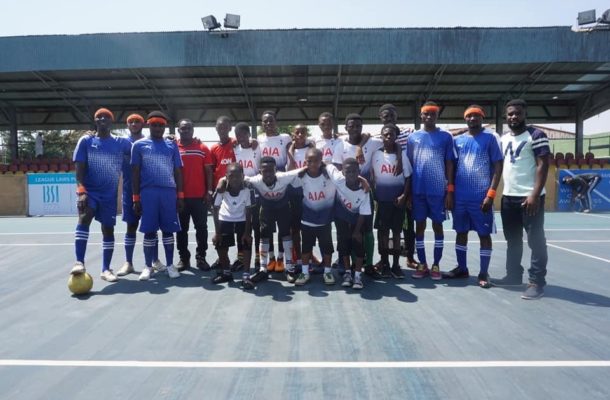 This year’s novelty Blind Soccer league organized by the Ghana Blind Soccer Association ended at the Accra sports stadium, Tennis court over the weekend saw Eastern Regional based club, Invisible Stars pounding their Volta counterparts, Great Olympics by 1-0 in the finals with Meshack Agbors lovely strike sealing the game in the 18th minute of the second half.

The Eastern Regional team-the Invisible Stars had earlier accounted for Mysterious Brothers FC from Greater Accra in the preliminaries with some dazzling skills edging them out in penalties to proceed to the finals.

Mysterious brothers FC from Greater Accra were just unlucky on the day as injury plagued their price asset, Agamisty midway the second half exposing their attacking weakness.

Present at the event were Board members of the Ghana Blind Soccer Association- Lady Bodyseer Boakye, Patrick Johnson and Shaaban Mohammed.

In his remarks, the Deputy Director of the National Sports Authority Mr. Wilson Abedu Wilson was highly elated at the commitment of the boys and implored on the playing body to live good lives through the sports they have chosen.

He stressed the desire of the Authority to support the course of Blind football in Ghana.

“Everybody is a winner. The participants have been very helpful. The more you practice the ore you become better. The organizers of the event should organize more of such events” he added.

The next event will encompass six regions and is set to kick off before the end of December, 2019.