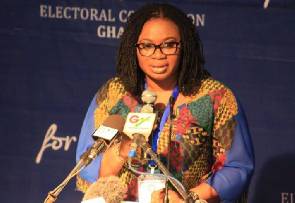 The Director of Elections for the opposition New Patriotic Party (NPP), Martin Adjei Mensah-Korsah, believes the Electoral Commission’s (EC) decision to outsource the electronic transmission of results to a third party is needless and a waste of resources.
Mr. Korsah argued that the proposed Electronic Results Transmission System (ERTS) for the 275 constituencies, is practically taking place already since the Commission already transmits summary collated sheets from its district offices.
“The EC is already engaged in electronic transmission and what they have transmitted in the past is a summary collated sheet. What they have done is to try and let them get the detailed one, a detailed collation sheet which gives you all the polling stations captured in one sheet,” he explained on Eyewitness News.
“It is not impossible or difficult to send both by themselves so I am wondering why we have to go and get a third party and the associated cost. I am told reliably that this thing we are doing runs into several millions of dollars – 20 million or so.”
Mr. Korsah noted that, the use of a third party could be justified if the transmission was being done from every polling station, but since it would be done from the district offices, “it can be done by the Commission and I am not too sure why you must go to a third party.”
He instead suggested that the EC focuses on building its capacity to carry out the e-transmission by itself.
“They have the base infrastructure already. They are going to be doing two e-transmissions that day because sending through fax is also electronic, and that will be done by the EC itself at their district offices.”
“I think we can excuse this process, send it electronically anyway in principle, but do not have to go through a third party and all the associated costs.”
Processes to select third party already in motion
Mr. Korsah’s comments come as the EC commenced processes for the proposed implementation of the e-transmission ahead the general election.
Two foreign companies, Scytl and Smartmatic, are the third parties in contention as they have been shortlisted to demonstrate their capabilities to electronically transmit collation center results in the December 7 polls.
The two companies made presentations to EC’s tender committee, political parties and civil society groups in attendance on Wednesday.
EC drops Ghanaian IT firm for e-transmission of results
Meanwhile, Persol Systems, the only fully owned-Ghanaian IT firm among five shortlisted companies hoping to electronically transmit election results in the December 7 polls, has been dropped by the Electoral Commission (EC).
NPP unhappy with e-transmission approach
The NPP had kicked against the electronic mode of transmission of the election results as it contended that the process had failed some countries including Kenya, Ecuador and Mexico.
According to the party’s 2016 Campaign Manager, Peter Mac Manu, the e-transmission process would not address the critical challenges that the election reform process seeks to overcome.
He further argued that there is no law which gives the EC the power to electronically transfer results.