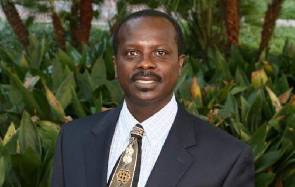 The Ghanaian professor based in US but popular for his many landmark court cases in Ghana has berated the Electoral Commission for daring to disqualify the presidential aspirants itching to contest the 2016 December elections.

Prof Stephen Kweku Asare said the decision by the Charlotte Osei led Electoral Commission is a willful violation of the Commission's own regulations.

His comments come in the wake of a possible class action against the EC by incensed presidential aspirants who were disqualified with some 55 days to go for the elections.

The candidates were disqualified for various reasons some of which included forgery, negligence, voter irregularities etc.

The affected candidates are incensed by the decision with majority of them threatening to go to court over the matter.

Contributing to the controversy on his facebook page, Kwaku Azar, as he is affectionately referred to, said the golden rule or rather "common sense" demanded that the EC ought to have extended the nomination period few days after the candidate submitted the form.

Kweku Azar said within that period of extension, the EC could have, as stipulated in CI 94 (9), vetted and corrected the many defects found in the forms submitted by the aspirants.

CI. 94 provides that, (1) “Whenever the nomination paper and the statutory declaration of a candidate are delivered and the deposit is paid in accordance with these Regulations, the candidate shall be considered to stand nominated, unless proof is given to the satisfaction of the returning officer of the candidate’s death, withdrawal or disqualification.

"The EC cannot conclude ex parte that a signature has been forged. It can only suspect.

"The Commission must give the affected parties an opportunity to explain or otherwise fix any defects. Perhaps, there is an innocent explanation.

"It is only after the Commission has heard from the affected party that it can conclude on the facts. Even here the EC can conclude on facts not the law.
"Whether crimes have been committed or not (e.g., forged signature) are matters that are better left to the judiciary.

"The Regulation clearly says that vetting by the EC can occur only when a candidate is deemed nominated. And that only happens when a nomination package is submitted, a statutory declaration is made, and the DEPOSIT is paid.

"Here, the deposits were paid on October 10. And the disqualifications were announced immediately (on that same day). That proves beyond any doubt that the "nominated candidates" were not given any notice of defects in their package and naturally any opportunity to fix the defects.

"The key here is because of the injunction application, no candidate was deemed nominated until October 10. Thus, any vetting prior to October 10 was defective and unlawful," he said.