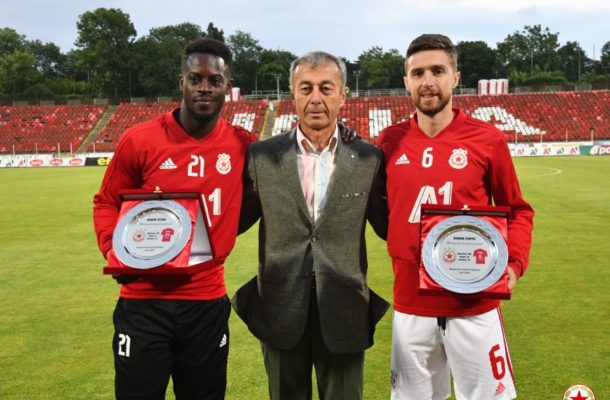 Ghana's Edwin Gyasi has left Bulgarian side CSKA Sofia after the expiration of his loan deal .

The 29 year old Ghanaian has been with the Bulgarian giants for two years and did not leave empty handed but penned a heartfelt message to his former club.

His last game for CSKA Sofia was the heavy 5 nil triumph over Berroe Stara Zagora which he featured.

Prior to last Sunday's game, the winger was handed a plaque in recognition of his time ,hard-work with the club.

The free agent will head to Europe's ultimate retirement home in  Turkey where he will link up with giants Besiktas on a two year deal.

The Dutch born Ghanaian has been in talks with the Turkish club for sometime now and will undergo his medicals in the coming days.

Gyasi has posted a glowing tribute to the Bulgarian club wishing them well.

Thank you CSKA ❤️ all the best in the future ??


The Ghanaian winger joined CSKA Sofia in 2018 during the winter transfer from Aalesund, featuring in 60 official matches of the club,  scoring a paltry 6 goals and providing 10 assists.

Gyasi made his Ghana Black Stars debut in a 5-1 win over Congo in a World Cup Qualifier in 2017.