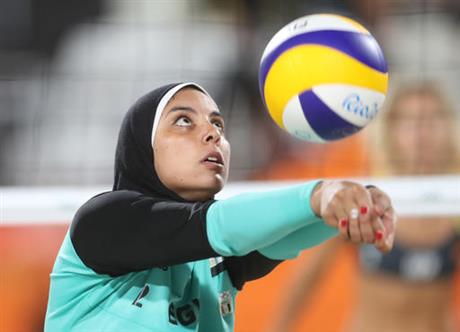 When Doaa Elghobashy made her debut at the Copacabana venue on Sunday night, she was proud to represent Egypt as part of the nation's first Olympic beach volleyball team.

As for the hijab that covered her head and the long sleeves on her arms and legs, she never gave that a thought.

Elghobashy and partner Nada Meawad qualified for the Summer Games through a regional competition designed to open the Olympic field to countries beyond the Brazilians, Americans and Europeans who dominate the international pro tour.

And when the Egyptians took the court wearing long pants and sleeves, they were the beneficiaries of uniform regulations that were relaxed by the international volleyball federation before the London Games so as not to exclude cultures that might be turned off by the standard bikinis and boardshorts.

"It was to open it up culturally," FIVB spokesman Richard Baker said on Sunday night as the Egyptians played in their opening match of the Rio Games. "The goal was to allow more people to play the sport of volleyball."

By one measure, it's worked. Baker said there were 169 different countries involved in the Continental Cup qualifying process for the 2016 Olympic, compared to 143 for London.

Egypt had never qualified for either the men's or women's beach volleyball tournament at the Olympics.

"I'm proud to be seen raising the Egyptian flag in a carnival with so many nations," Elghobashy said.