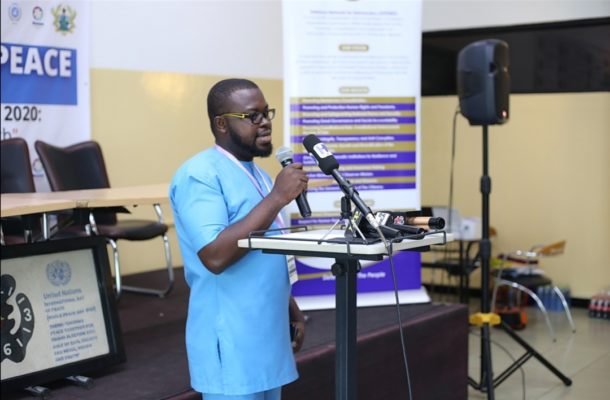 The Executive Director of Human Rights Reporters Ghana (HRRG), Mr. Joseph Wemakor has charged all Ghanaians to be peace-loving, law-abiding and above all ensure that all their actions, efforts and utterances are geared towards promoting a culture of peace, non-violence and its sustainability before, during and after the upcoming general elections slated for December 7.

He equally appealed to all and sundry to be ambassadors of peace; committed to preaching peace and endeavour to always condemn acts of violence which are likely to mar the peace the country enjoys.

Mr Wemakor who doubles as the Taskforce Member (National Focal Person) of the African Network of Young Leaders for Peace and Sustainable Development (ANYL4SD) in Ghana also called on Ghanaians to commend all initiatives which seek to promote peace and unity as the nation meanders towards electing the next leader to steer its affairs in the upcoming general elections.

He made this known while addressing a forum to commemorate this year’s International Day of Peace (World Peace Day 2020) on the theme: Shaping Peace Together for Ghana Election 2020: “Role of Civil Society and Media, Women and Youth” in Accra on Monday, September 21, 2020.

The International Day of Peace is a day observed around the world on September 21 each year. It is a day set aside by the UN General Assembly to end hostilities, atrocities, wars and any form of violence which threatens human existence on the planet earth.

The event, an initiative of the Defence Network for Democracy (DEFNED), a Civil Society Organization (CSO) supported by its partners convene various participants made up of senior policy analysts, peace and security researches/analysts, guests from academia and media, reps. of civil society organizations and civic institutions, students, reps. of youth groups and faith-based organizations, political parties and state agencies among others.

It was an avenue for participants to brainstorm on the best way forward in protecting, consolidating and sustaining the overall values, principles and credentials of Ghana’s democracy towards the realization of sustainable and inclusive peace and security environment particularly against all unforeseen existential peace and security threats and risks which has the potential to destabilize and disturb the peace and security of the country before, during and after the upcoming polls in December.

Elections are an essential part of the democratic process and organization, and a means to manage political competition and conflict in a peaceful way.

However, history has taught us in Ghana since 1992 that elections conducted has experienced some level of violence depending on the intensity which varies from election to election.

As the 2020 elections draws near, there’s a seemingly fear that if care is not taken thing could escalate looking at the unexpected events on the ground already which cast shadows on the upcoming polls.

But delivering his welcome address at the event, the Chief Executive Officer (CEO) of Defence Network for Democracy, Mr. Kingsley Amoah called for unity among all Ghanaians irrespective of their religious beliefs or political affiliations as a way to ensure peace that prevails at all times in the country.

“Ladies and gentlemen, I’m calling on you today be it, a Moslem, a Buddhist, a Jewish, a Traditionalist or whoever, we are all created as one individual to share common values together so we can sustain our country, our mission, and the planet and secure even the generation unborn”.

While citing some unforeseen acts rearing ugly heads in many parts of the country such as reprisal attacks, politics of insults and violence, to mention few particularly at a time this year’s general elections inches near, he appealed to all Ghanaians to rise up as ambassadors of peace, volunteers and flatly condemn such acts to prevent violence.

Mr Amoah also called on the media to be circumspect in its reportage in order not to mislead the citizenry but to adequately inform them to become discerning in the discharge of their civic duties.

For his part, Senior Lecturer at the Department of Languages, University of Ghana, Dr. Antwi Boasiako admonished politicians to desist from the politics of insults, diabolical invectives and the use of intemperate languages on campaign podiums, which has the potential to inflame passion and eventually lead to chaos.

The peace forum sought views from various speakers, participants and panel of discussants alike whose statements rally around promotion of sustainable peace, unity and transparency among others before, during and after the December 7 polls.

Defence Network for Democracy (DEFNED), is a fully-fledged non-profit, humanitarian and independent civil society organization dedicated to the promotion, consolidation and sustainability of democracy and human rights, good governance and development, peace and security in Ghana and Abroad.