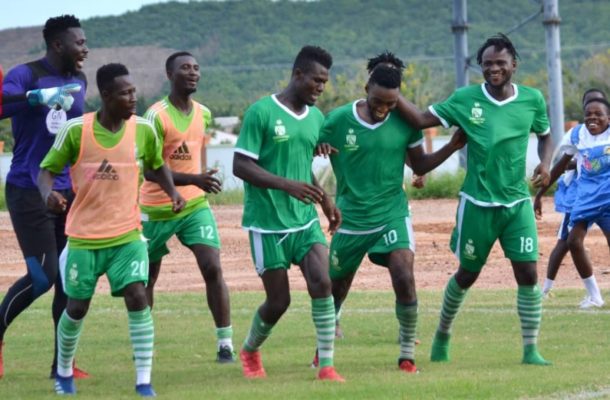 Medeama SC saw their unbeaten home smashed by a determined Elmina Sharks side at the Akoon Park  in their week 10 clash on Sunday afternoon.

The Elmina based side inflicted a 2-1 defeat on Medeama SC, making them the only side to achieve that feat in Tarkwa this season.

Coach Boadu's charges started the game on a bright note, mounting pressure on Elmina Sharks which earned them the opener in the first quaker of the encounter.

Striker Prince Opoku Agyemang snatched the lead for Medeama SC with an audacious free-kick on the 15th minute.

Elmina Sharks gained possession to launch fearsome attacks on the the home side which handed them the leveller before the half-hour mark.

On the 24th minute, Alhaji Mustapha restored the parity of the game for the 'Botwe' lads with a beautiful finish.

The two sides possessed the ball in the midfield as they exchanged brilliant passes among themselves as the first department ended in a one-all draw.

The game produced several thrills but the tactical approach from Coach Yaw Acheampong did the trick for the visitors.

Sharks adopted delay tactics and pounced on the counter after losing the lion share of possession to the home side.

Sharks profited from the  12 minutes added on to steal a famous victory on the road.

Benjamin Bernard Boateng scored with the last kick of the game to bury the home side at the Akoon Park.