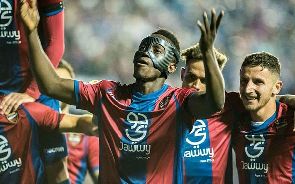 UD Levante forward Emmanuel Boateng will miss his side’s trip to the Baláidos to face Celta de Vigo in the final game in La Liga on Saturday.

The 21-year-old is suspended for yellow card accumulation and has been left out of the squad for the trip.

Boateng picked up his fifth caution resulting in the suspension last weekend when he scored a hat-trick in the 5-4 win over Barcelona.

"Boateng cannot participate in the match between Real Club Celta de Vigo and Levante next Saturday at Balaidos Stadium at 1pm," The Frogs announced via their official website.

"The forward will miss the last league match this season after seeing his 5th yellow card during the game between Levante and Barcelona at the Ciutat de Valencia."

Meanwhile the in-form striker has been handed a maiden call-up to the Black Stars team for the upcoming international friendlies against Iceland and Japan.

He has scored 6 goals in 25 La Liga appearances this season.