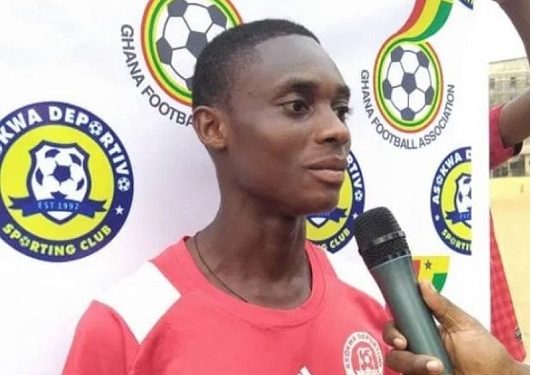 Asokwa Deportivo's Emmanuel Osei Bonsu is not available for any team in the Ghana Premier League, club president has declared.

The sensational youngster is among the hottest commodities in Ghana's transfer market after he caught attention of Accra Hearts Of Oak and Legon city with his exploits in the suspended league.

But Camarat, who is the bankroller of the division one side says the midfielder will not be sold to any team in the domestic League as he eyes are foreign contract for the Kumasi Senior Technical School graduate.

It was reported in the media that Ghana premier league sides Hearts of Oak and Legon Cities have made an approach to sign the young winger to augment their squad as they wait for in hopes for the return of the league which has been suspended over the COVID-19.

“It’s true Hearts of Oak and Legon Cities have been seriously keeping tabs on signing Emmanuel Osei but the player’s brother who is an agent abroad has secured a club for him over there so currently his doors are closed for any team in Ghana,” Camarat told Kumasi-based Light FM.

The highly-rated youngster has scored four goals in 10 games for Asokwa Deportivo in the 2019/20 Division One League season.