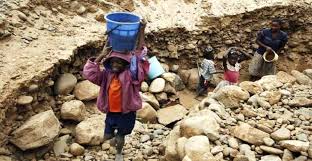 The Ministry of Employment and Labour Relations (MELR), has signed a Memoranda of Understanding (MOUs) with 36 lead institutions to deal with child labour.

The signing of the MOUs with the 36 institutions is to also secure their commitment to carry out their responsibilities and roles as assigned to them in the MOUs.

Haruna Iddrisu, Minister of Employment and Labour Relations, said the second phase of the NPA, developed by the Ministry through the National Steering Committee on Child Labour for implementation from 2016 to 2020, was aimed at reducing the reducing the worst forms of child labour to the barest minimum, that is 10 per cent, by 2020.

He said the growing incidence of child labour in Ghana is a matter of major concern to the country’s international partners, especially the United States.

The US registered its disappointment at the handling of the matter during a recent trip to that country by the Minister of Employment.

He gave the assurance that Ghana is committed to the fight against all forms of child labour and is putting in measures to tackle the phenomenon, which is pervasive in various sectors, especially the cocoa sector.

He said the Ministries of Employment and Labour Relations, Interior, Gender, Children and Social Protection and the Attorney General and the Ministry of Justice are the lead agencies in the fight against child labour and would work in a coordinated manner to end child labour.

Mr Iddrisu stated that as part of the moves to address child labour and related issues, the Domestic Workers Regulations Bill has been signed and would be laid before Parliament when it reconvenes.

The Ministry has also mandated the Chief Labour Officer at the Ministry to deal with unlicensed recruitment agencies, who tend to recruit underage children, especially for domestic work.

He called on stakeholders to show real commitment beyond the NPA2, especially the lead agencies, to end the worst forms of child labour.

Mr James Agalga, Deputy Minister of the Interior, said the Ministry had tasked the Ghana Immigration Service and the Ghana Police Service to increase its investigations into incidence of child trafficking.

He noted that more sensitisation is needed to make people aware of the illegality of child trafficking and child labour, and to facilitate prosecution when arrests are made.

Some stakeholder agencies, including the International Migration Organisation, and the International Cocoa Initiative, underscored the need to address the child labour  as it affects the future of children in the country and pledged their commitment to support the fight.

Director of Research and Projects at the Ghana Employers Association said there is the need for a holistic approach to tackle child labour that would address both the push and pull factors of child labour.

He also called for increased social dialogue on the matter and also for more funding for the implementation of the NPA2 to ensure its success.

Following the signing of the MOUs, the NPA2 document is expected to be submitted to Cabinet for approval and then printed and launched.

The successful implementation of the NPA2 is also expected to help achieve the Sustainable Development Goal No. 8.7.