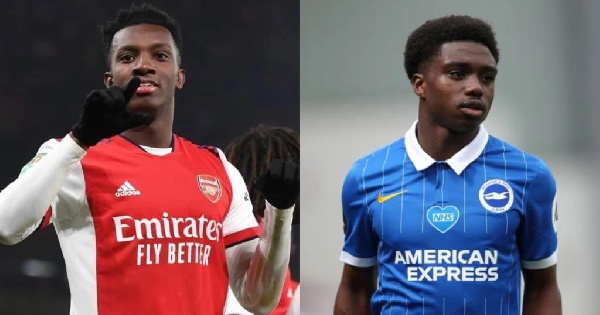 England youth stars Tariq Lamptey and Eddie Nketiah are expected to switch their nationalities to play for the Black Stars of Ghana by next week.

The Ghana FA has been tracking the  duo among several other foreign-born Ghanaians for a while now but that will soon come to reality.

Nketiah  and Lamptey  have both given the Ghana FA the green to  pursue their nationality switches long  ago and Ghanaguardian.com sources within the corridors of power at the GFA says that the two players have already acquired their Ghana passport.

Black Stars head coach Otto Addo confirmed that he expects the nationality switches of  three players to be concluded next week.

Nationality switches for the duo are less complicated as compared to Callum Hudson-Odoi who made three appearances for the Three Lions.

Hudson-Odoi's switch will have to wait till October whiles Lamptey and Nketiah have only played for the English under age teams which makes their switch straight forward.

The 22 year old Nketiah was born in Lewisham- England to Ghanaian parent but currently plays for the English U-21 where he has 17 caps with 16 goals and the top scorer  at that level but is yet to make an appearance for the Three Lions.

Tariq Lamptey too was born in England to Ghanaian parents and came through the famed Chelsea academy at Cobham before joining Brighton and Hove Albion.

Lamptey has played for England at the under age side but has decided to commit his international future to Ghana and was at the stadium when Ghana played Madagascar at the 2023 AFCON opener at the Cape Coast Stadium.

Nationality switches for the likes of Inaki Williams, Steven Ambrosius, Callum Hudson-Odoi are expected in the coming months before the World Cup in Novemeber.