Eurobonds have come to stay – Terkper 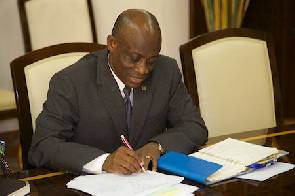 Finance Minister, Seth Terkper, has stated that the decision to raise capital through the issuance of international bonds, otherwise known as Eurobond, has become a mainstay in Ghana’s borrowing mix.

According to him, Eurobonds provide a cheap source of funds to support the country’s recurrent and capital expenditure.

The remarks, which point to government’s plans to turn to the international capital market every year, follows the recent successful issuance of the country’s fifth Eurobond of $750 million at a 9.25% yield amidst fears that the appetite for Eurobond could lead to record interest payments.

The country is expected to pay some GH¢10.5 billion in interest payments this year alone, a figure which is likely to rise further given other debts taken on by the government for financing capital expenditure and other debts.

Mr. Terkper, however, has explained to the B&FT that Eurobonds usefulness to Ghana’s economic strategy cannot be in doubt as it falls in line with the ‘smart-borrowing’ agenda of the government and that the bonds are not any different from other borrowing means.

According to Mr. Terkper, per government’s new debt management strategy, the sinking fund which will allow the government to handle bullet payment of debts obligations such as the maturing 2017 Eurobond is modelled after Cocobod’s successful escrow account mechanism which allows it to borrow on the international capital market at a cheaper rate.

“As we improve with the sinking funds, it’s possible to get Eurobonds at cheaper rates just like Cocobod -- if they didn’t develop the escrow mechanism in place, they could be borrowing at 8-9 percent.

“But Cocobod is on the capital market, and we don’t question why they should borrow from the markets because it’s a cheaper source of financing,” Mr.Terkper added.

Ghana as part of the new debt management strategy recently implemented a “buy-back” of $100 million of the Ghana 2017 bond using the newly established sinking fund. As a result, the balance on that Bond has been reduced to $400 million, which will be redeemed from the proceeds of the new issue.

Though the recently issued Eurobond in a broader market context is considered a significant transaction because it represents the first sub-Saharan African (excluding South Africa) sovereign issue in 2016, the rate is a lot higher than what it cost COCOBOD to secure its international facility.

COCOBOD on September 21 this year signed a $1.8 billion loan facility for the purchase of cocoa beans for the 2016/2017 crop year which comes with an all-inclusive rate of 1.468 percent, far cheaper than the interest government got on its Eurobond.

“But can we also enhance the performance of the economy –put mechanism in place like channeling the Eurobonds that we issue to replace our penchant for going for T-bills to finance the capital expenditure in the budget and using them to do capital development and pay over 10 years rather than using them to repay short-term debts,” the Minister added.

Meanwhile, transfers to key funds like the District Assemblies Common Fund (DACF) and the Ghana Education Trust Fund (GETFund) for this year sum up to GH¢3.07 billion, which falls several billion short of the cost of borrowing.