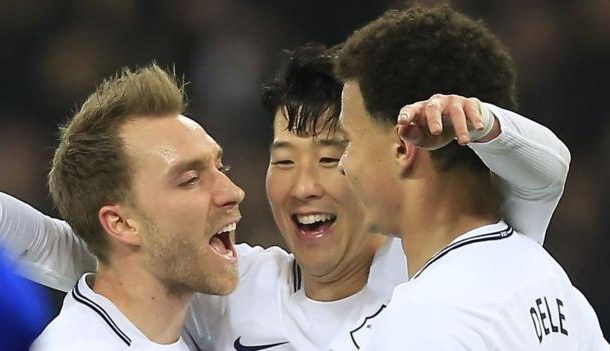 Tottenham produced an outstanding performance to brush aside Everton and move two points behind second-placed Manchester City in the Premier League table.
Mauricio Pochettino's side had to come from behind at Goodison Park after Theo Walcott swept home Dominic Calvert-Lewin's low cross from Gylfi Sigurdsson's defence-splitting pass.
Everton's lead, however, was short-lived as Son Heung-min produced a sublime equaliser from a tight angle following a mix-up between Kurt Zouma and Jordan Pickford.

Dele Alli put Spurs ahead for the first time after reacting first to Pickford's save from Son, then Harry Kane made it 3-1 when Kieran Trippier's curling free-kick hit a post and rebounded into the England captain's path.
In an entertaining game, Christian Eriksen's sublime first-time shot extended Tottenham's lead before Sigurdsson scored a consolation against his former club.
Son added the fifth and produced the cross for Kane to make it six, yet victory came at a cost for the free-scoring visitors.

Alli was forced off after a challenge with international team-mate Pickford, which former England captain Alan Shearer described on social media as "disgusting". Spurs head into Christmas five points ahead of Chelsea and Arsenal, who are fourth and fifth respectively.
Ruthless Spurs very much in title race
Tottenham head into the Christmas programme with doubts lingering over manager Mauricio Pochettino, who has been linked with the permanent Manchester United job following Jose Mourinho's dismissal.
Yet for all the talk about Pochettino's future, Spurs remain in rude health on the pitch after following up a Carabao Cup victory over north London rivals Arsenal with a stunning fourth straight league win.
Not only are they in the last-16 of the Champions League, Tottenham have a Carabao Cup semi-final with Chelsea on the horizon and are third in the Premier League table - six points behind leaders Liverpool.
For all the talk of Pochettino and United, there were no distractions on the pitch as Everton were ruthlessly put to the sword.
Spurs were just too good in front of goal and once the visitors had recovered from falling behind, there was no looking back.
While Son's goal from the tightest of angles to make it 2-1 was a superb piece of skill, Eriksen's sensational finish from outside the box was breathtaking.
That made it 4-1 yet Spurs were still not done.
Son shot through the legs of Pickford to make it 5-2 after Sigurdsson had reduced the deficit before man-of-the-match Son played a deft low cross for Kane to slide in and steer into the corner.
This was Tottenham's ninth Premier League away win of the season - and 14th in 2018.
While they are in this formidable form, Spurs are very much in the title race.
More to follow.