Everton 2-6 Tottenham: 'How Pochettino methods have put Tottenham in the title race' 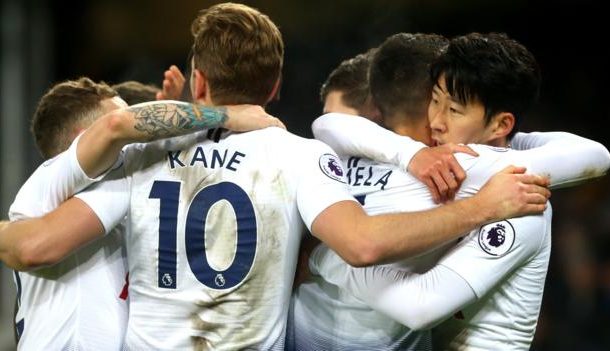 Tottenham are suddenly being talked about as title contenders after their superb 6-2 win at Everton on Sunday, but it was a performance I had seen coming.
I was more surprised by how poor Everton were because, having watched Spurs a lot over the past few weeks, they have been getting better and better.
Their only negative result since the end of October was their defeat in the north London derby, which came at the end of a very tough week in which they beat Chelsea and Inter Milan.

Since then, they have responded unbelievably well and - as always - they are reaping the rewards of Mauricio Pochettino's training methods and the way he rotates his team.


Spurs have won seven of their past eight Premier League games, with Hugo Lloris, Son Heung-Min and Harry Kane the only players to feature in all of those matchesSometimes he rests players for important games, but what people often don't pick up on are the times he plays them through the moments when it might seem like they need a break.
Mauricio understands how sometimes players need to do that to get fitter, and now he is reaping the rewards.
The quality of Tottenham's play compared to Everton was probably the biggest difference between the two teams at Goodison Park on Sunday, but their respective work-rate stood out for me too.
There could not have been a bigger contrast in the way Spurs sprinted to every ball, while Everton jogged.
That was one of the reasons Tottenham ran out such convincing winners, and it is not just a coincidence that their players have been getting stronger and stronger as their form has improved in such a busy few weeks.
Spurs are not favourites - but they are in with a chance
It has been so tight at the top between Liverpool and Manchester City until this weekend that many people were not talking about Spurs as being contenders. They are now.
It is easy to get over-excited after an outstanding display like the one I watched at Goodison Park but, while I still think they might ultimately fall short of the title, there is no doubt they are in with a shout.


Tottenham were 21 points behind leaders Manchester City on Christmas Day 2017, and ended up 23 points behind the champions at the end of the season. This season they are four points off the top, and their remaining festive fixtures see them play Bournemouth and Wolves at home then Cardiff away.They have won 11 of their past 13 games in all competitions, and if they take maximum points from their next three matches over the festive period they are going to be even closer to at least one of the teams above them, because City host Liverpool on 3 January.
While I can understand why Pochettino played down his side's chances on MOTD2 by claiming the top two are "clear favourites" he will know Spurs are in with a shout this time.
If you had asked him at the start of the season what it would mean if they were within two points of City at Christmas, I think he would have replied that they would be in with a chance of winning the Premier League.
That in itself is a great achievement, but the way Spurs have done it by collecting their best points tally of the Premier League era while also reaching the last 16 of the Champions League and the semi-finals of the Carabao Cup is even more impressive.


Jenas spoke to Pochettino on Match of the Day 2 after Tottenham's impressive win at Goodison ParkWhat happens next? Past failures will spur them on
Tottenham's squad depth is still my biggest concern, and why I feel winning the Premier League might be beyond them.
Any injury that kept Harry Kane, Christian Eriksen or Dele Alli out for a significant length of time would be a huge blow to them.
They are already going to be without Son Heung-Min for potentially the whole of January while he plays for South Korea in the Asian Cup. The way he has been playing, and scoring goals, he will be a big miss.
But that is the only really bad news. And, aside from their fitness levels and current good form, there are other positive factors that put them in a very good place to build on this position.

Everton 2-6 Tottenham: Mauricio Pochettino praises 'fantastic performance'The most important change I have seen from Spurs this season is they now have the ability to win ugly.
When they play like they did against Everton, they usually win; when they perform like that, I think they could beat any team on the planet.
But previously, when their levels dipped, they could not drag themselves through matches - their defeats last season by Juventus in the Champions League and Manchester United in the FA Cup were good examples of that.
Now it is different. In the first few months of this campaign I don't think they played well very often - maybe two or three times maximum - but I saw a new level of maturity within the team that meant they could manage matches and grind out results.
They also know what it is like to be in this situation and fail.
Experiences like the horrible defeats they suffered against Chelsea and Newcastle at the end of the 2015-16 season are with this side, because the same players are still at the club.
They all felt what it was like to fall short and their desire for it to be different this time is inside them, and it is driving them on in every single game.
Will Pochettino speculation affect Spurs' season?

Pochettino remains 'focused' at Tottenham after Mourinho sackingOf course things never seem to be completely straightforward for Spurs.
There has already been a delay in their move to their new stadium, and now they are having to put up with speculation about Pochettino's future after Jose Mourinho was sacked by Manchester United.
I don't think talk of him leaving in the summer will affect Tottenham's chances of success this season but, in a weird way, I think the more positive things that happen to them in the next five months, the worse their chances are of keeping him.
I have been afraid of United coming in for Pochettino for a couple of years now because, with his style of play and ability to develop players, he is the exact fit for what they want and what they need.
If he is offered the job at Old Trafford he will have a big decision to make, but I think for him to leave it would take one thing which I don't feel he is prepared to do right now - which is to basically look at the chairman Daniel Levy, the club and the fans, and say: 'I resign.'
We will have to wait and see what happens but, the type of person that Pochettino is, I think the only way he would do that is if he was leaving the club in a good place.
So, if Spurs won the Premier League, the Champions League or the FA Cup, that could be the time he says: 'There you go, that is the end - this is what I was trying to achieve at this club and now I am going to move on." Jermaine Jenas was speaking to BBC Sport's Chris Bevan at Goodison ParkSource: bbc.com