Exclusive: Raphael Dwamena seeks solace in Denmark after being prevented from playing in Spain 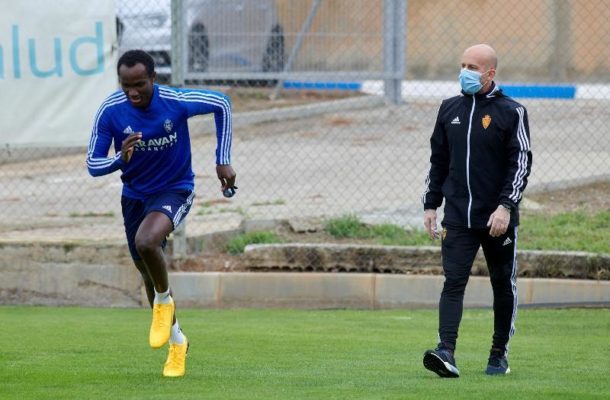 Raphael Dwamena aims to continue his career in Denmark after not being able to do it in Spain by having a DAI implanted in his heart.

He is looking to resolve his future and his determination to play is absolute.

Raphael Dwamena maintains his intention to continue playing football is intact and right now the striker's decision is to continue his football in Denmark.

The Ghanaian is on loan from Levante at Real Zaragoza and has been out with a heart condition since November, but he intends to move to Denmark, since they already know his company Swiss representation and the footballer himself who in Spain will not be able to continue playing football.

The striker already has the endorsement of a doctor in Switzerland to be able to continue playing soccer, but Spanish sports legislation prevents the practice of professional sport if he is wearing a DAI (Implantable Automatic Defibrillator) and the Ghanaian forward was implanted in January.

Dwamena, after continuing his rehabilitation in the Sports City in the beginning of July, left for Switzerland a little over a week ago and his agents are looking for clubs in Denmark or Norway, with the most feasible destination being the former.

Levante, owner of the player's rights, is waiting to make a final decision, either to seek for the termination of his contract, which has two years left, or a transfer to a club, always with the essential medical endorsement, to see if the entity granota can release part of the player's heavy cost, which amounts to 800,000 euros.

In the Valencian club, it is aasured that this decision has not yet been made and, in any case, Dwamena's initiative is to seek a new club elsewhere.

The player's first intention was to continue in Spain, but that legislation prevents it, although that has not stopped his determination.

Dwamena, in the last two months, has increased his work in training at Zaragoza, with changes in pace, sprints or group work time, and has given a very good response, making it clear that he is very fit.

In fact, even the footballer considered playing in the final part of this season, but Zaragoza in no case would have accepted and neither would Levante.

The striker was discharged by Zaragoza last November after suffering several episodes of dizziness in some matches and training in October.

The last game he played was against Cádiz on October 9, with 649 minutes and two goals before he had to leave football practice indefinitely.

He was consulting various specialists, in Barcelona, ​​in Zurich and also in Ghana, his country of origin, and was successfully operated on at the Miguel Servet University Hospital in the Aragonese capital at the end of January.

The operation consisted of two phases: the first one consisted of carrying out an electrophysiological study and, later, the implantation of an ICD that protects him in the event of serious arrhythmias.

The tip, an example of professionalism and good character, has left a deep mark on the Zaragoza outfit, where everyone has turned to his support in recent months.

With deep religious convictions and always very involved in supporting solidarity causes, he has the affection of the entire club.

Dwamena is therefore determined to continue and his good role at Zürich, before signing for Levante for 6.2 million euros in 2018, makes him have a good lineup of takers in several countries.

The problem is his medical history, with the risk that such a bet can entail for any club.

In 2017 Dwamena was about to sign for English Premier League side Brighton, but he did not pass the medical examination for a heart problem, which he found a remedy with the implantation of a holter.