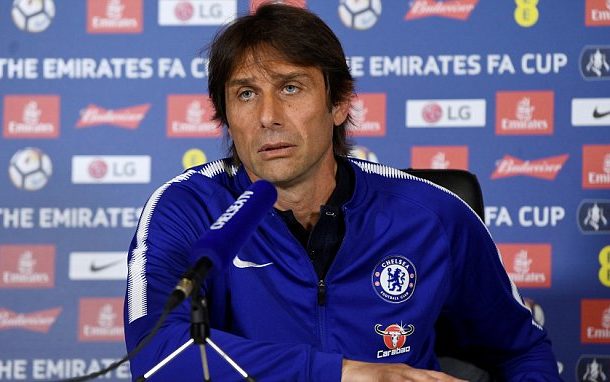 Chelsea manager Antonio Conte says he will shake Jose Mourinho's hand when his side face Manchester United in the FA Cup final at Wembley on Saturday.
The two managers have endured a tense relationship during their time in opposing dugouts in the Premier League.

But Conte said on Friday: "Tomorrow I will shake his hand and both of us will think of the game.

"It is not important what happened [previously]. There is a normal relationship between me and him."

A long-running feud stretches back to October 2016, Conte's first season in England, when the Italian upset Mourinho with his celebrations following Chelsea's 4-0 home win over United.

In January, Conte described the Portuguese as "a little man" following a barbed exchange in the media.

Is Conte on his way?


Conte has been tipped to leave Chelsea this summer and when questioned about his future teased the media, declaring: "I can say for sure this will be my last match, this season.

"For me and my players it will be the last game for us. Then, as you know very well, I have a contract and I'm committed to the club."

Mourinho refused to speculate about Conte's future, saying: "Until it's official that Antonio leaves I don't know. Honestly, you ask me if I'm interested in it - I'm just curious about it.

"The only thing I say in relation to Chelsea supporters is that since my first day in 2004 until my last day when I was sacked a couple of years ago, they were with me unconditionally," said the 55-year-old, who won eight trophies at Stamford Bridge.

"That I will never forget because they did what I think great supporters do, which is to support their manager unconditionally until the last day.

"In relation to Chelsea supporters, this I don't forget: they were phenomenal."

We deserve the chance to win - Conte


Conte lost last year's Cup final - and the chance to record a double in his first season - with a 2-1 defeat against Arsenal, a game he described as "strange".

This year, his team's defence of the Premier League title resulted in a fifth-place finish, 30 points behind champions Manchester City, and the 48-year-old former Juventus boss said: "We have to fight against a really good team and we want to fight.

"For us this game is very important because we have in a difficult season [the chance] to finish the season with a trophy."

Season will not be judged on outcome - Mourinho


Mourinho says his team's campaign will not be judged on the outcome of Saturday's final.

United finished second in the Premier League - their highest placing since the 2012-13 season - but will be without silverware this season if they fail to defeat the Blues.

"I'm not going to change my analysis of the season because of one match," Mourinho said.

"You can analyse the way you want to."

The former Chelsea boss has won 12 cup competitions during his club career and, in his first season in charge at Old Trafford, won both the Europa League and League Cup.

"I think the winning mentality doesn't have to do with records or history in finals," he added.

"I honestly think what we did in the past has nothing to do with tomorrow and the records don't matter. What matters is 11 against 11 and everybody trying to give their best."

Contests between the two finalists have been tight in recent years with only three or more goals scored on three occasions in the past 13 meetings.

When asked whether Saturday's match will be an open game, Mourinho said: "I still don't understand these words of 'entertaining'. You think 6-0 is entertaining? I don't think so."

Analysis - are both managers being negative?

"In Antonio Conte, I have seen and listened to a manager who has pretty much complained from the very first game of the season to the last day about his squad.

"That will have a negative effect because you are one of those players and he's saying you are not good enough. Not directly but by the complaints he's saying that.

"Jose Mourinho is saying certain things to players publicly. Maybe these players are actually starting to feel 'you're not the guy who is going get me motivated anymore'.

"There's a difference between application and mentality, and you looking at your manager and thinking 'you're annoying me a little bit in terms of the comments you are making about me, I don't feel like you are supporting me anymore'."