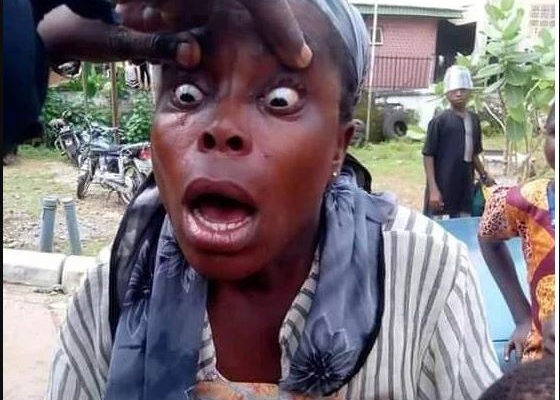 The woman applies 'Rob' ointment on her eyes

A woman pretending to be blind has been exposed and nabbed in Ebonyi state, Nigeria.

It was gathered that the fake blind woman was arrested by Special Adviser to the Governor David Umahi of Ebonyi State on Mineral Resources & Environmental Management.

According to an eyewitness who shared the report, the woman who hails from Imo State always asks for “alms at Union Bank Junction in Abakaliki.”

According to him, "It’s her usual practice to apply ‘Rob’ ointment on her eyes, her eyes respond to the stimuli, she keeps it shut while one of her little children leads her by the hand!”

“She reapplies the balm when its effect on her eyes seem to be waning”.

As at the time of filing this report, the Governor’s Aide has moved the woman to old Government house.
Source: kemifilani.ng