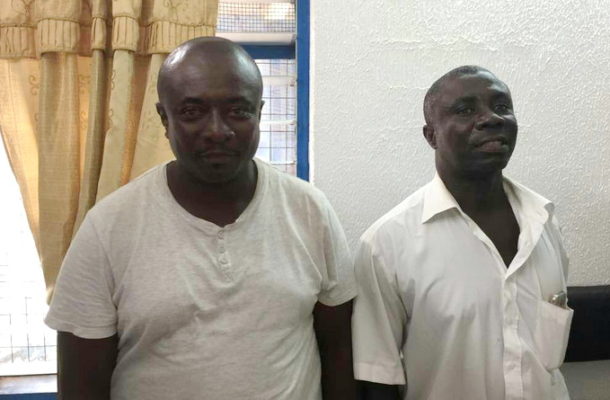 Two men have been arrested for allegedly posing as workers of the Electricity Company of Ghana (ECG) and defrauding some persons in Agbogba, near Legon in Accra, and surrounding communities.

The suspects, identified as Kofi Yeboah and Emmanuel Armah, are said to have introduced themselves to their victims as members of an ECG task force which had been set up to identify households that were connected to power illegally.

While police investigations have established that Yeboah is a contract worker of the ECG, Armah, on the other hand, is a private electrician.

Their victims, according to police investigations, were people who were using old ECG postpaid meters.

After introducing themselves to their victims, they are said to have inspected the meters used by the households, after which they extorted money from the victims, whom they accused of engaging in illegal power connection.

Other victims claimed they were also accused of owing the ECG huge sums of money.

Briefing the Daily Graphic, the Public Relations Officer (PRO) of the Accra Regional Police Command, Assistant Superintendent of Police Mrs Effia Tenge, said the two suspects were arrested with the help of one of their victims.

She said Yeboah and Armah had introduced themselves as ECG task force officers from the Kwabenya Unit to the victim, whom they claimed owed the ECG GHc6,000 covering months of non-payment of power and a current reading of GHc2,000 on his meter.

The two asked the victim to pay the old debt of GH¢6,000, after which they would write off the current debt on the meter.

They are also said to have told the victim that they would replace his old meter with a prepaid meter which would cost him GH¢1,000.

According to the police, the two left when the victim refused to pay, only to return the next day to demand for the payment of the GH¢6,000 ECG debt.

The victim is said to have told them to return the next day for the money and reported the case to the Agbogba Police.

The police arrested the two men when they went to the victim’s house for the money the following day.