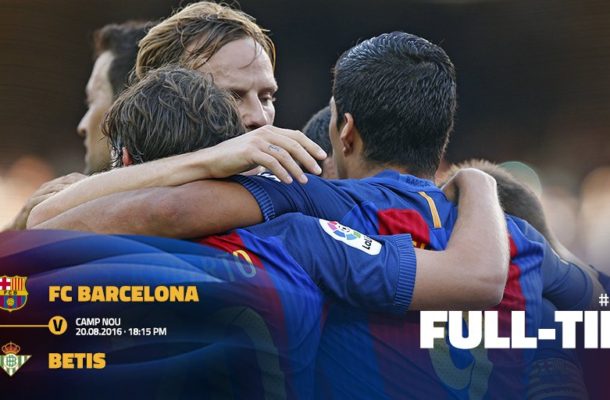 FC Barcelona began the defense of their La Liga title with a convincing victory against Betis on Saturday evening at the Camp Nou. 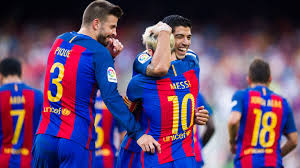 and opted for Sergi Roberto at right-back and Arda Turan on the left side of attack, ahead of Aleix Vidal and Munir respectively.

Barça took the lead after just six minutes. Leo Messi was instrumental as he delivered one of his trademark curved passes in behind the opposition defence with his mercurial left foot.

This released Jordi Alba on the left side of the area, the left-back squared it for Arda Turan, whose flick had enough pace on it to beat the despairing lunge from Aissa Mandi on the goal line.

Soon after, we were almost treated to a carbon copy of the opener, as another Messi ball to the left found Arda, whose header towards Luis Suarez caused some panic in the Andalusian club's area, before the ball was cleared for a corner.

A free-kick just outside the area provided Betis hitman Ruben Castro with a chance to strike at goal. His right-footed effort carried pace, but Claudio Bravo will be disappointed that the hand he got to the ball was not strong enough to keep it out of his goal.

Bravo was again shown plenty of support from the home fans ahead of his expected move to Manchester City in the coming days.

The Blaugrana pushed to regain their lead, generating wave after wave of pressure towards Antonio Adan's goalmouth.

Luis Suarez had a good looking penalty appeal turned away by Undiano Mallenco after going to ground under a challenge by Mandi, as the Betis defender seemed to shove the Uruguayan.

Denis Suarez, more lively in the first 45 minutes than in the midweek Super Cup game, then had a shot deflected over, and then Messi smashed a right-footed drive off the crossbar.

The Argentine soon found his shooting range, a quick dart to the left finding a half-yard of space outside the area to unleash a vicious strike that arrowed into the corner of the net.

Barcelona had recovered their lead, and soon doubled their advantage, as Messi released Sergi Roberto down the right, and the Catalan's precise cutback was swept into the far corner by last season's 'Pichichi' Luis Suarez.

We reached the half-time interval at 3-1, and with the home side at their most confident.

Luis Enrique's team came out for the second-half in the same vein, on the front foot looking to put the game to bed.

Messi had a shot parried into the air by Adan, but Arda Turan was offside as he beat the Betis keeper to the rebound. He then clipped a cross into the area for Denis Suarez, but the his acrobatic volley lacked the necessary pace to trouble Adan.

The Barça captain was instrumental in the fourth strike, leading the counter-attacking charge, playing a one-two with Arda, and then squaring for his good friend Luis Suarez to tap into the open goal.

The Argentine scored his second, and Barça's fifth, within minutes, as he struck low from just outside the area and into the corner.

The Camp Nou were being treated to yet another masterclass from their beloved magician.

Munir was introduced for Denis Suarez with around 20 minutes remaining, which saw the rejuvenated Arda retreating into midfield.

By this point, the tempo of the game had understandably dropped, as the Catalans controlled the possession and their energy levels.

There was still time, however, for Luis Suarez to claim the match ball, with a wonderfully whipped free-kick which beat both the Betis wall and goalkeeper, and for Ruben Castro to grab his second, after latching quickly onto a loose ball following a free-kick played into the Barça box.

Antonio Adan prevented the result from getting more embarrassing for the visitors with good saves to stop substitute Lucas Digne and then Ivan Rakitic.

A very promising start then for Barça to the new La Liga season, led by a Leo Messi who, like a fine wine, seems to improve with age.