FEATURE: Chronicle of the great moments of the 2015/16 Ghana Premier League 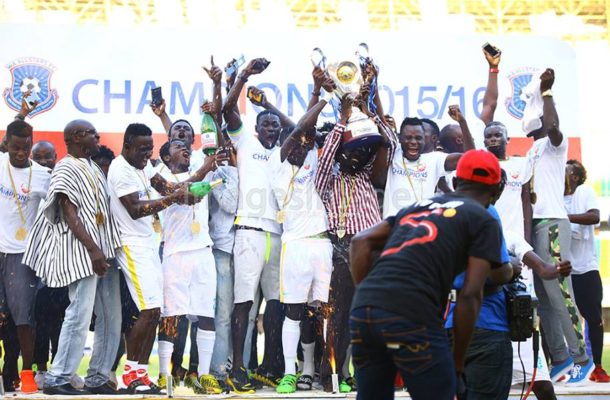 The 2015/16 Ghana Premier League is definitely not ending without leaving us with memories of the great moments.

Notwithstanding, the league has enjoyed some great moments of good football, magnificent display of talent and demonstration of excellent technical skills by some players while coaches rubbed shoulders with their tactical demonstration of the game.

Hearts miraculous comeback against Inter Allies: I am sure this game is still fresh in the memories of Hearts fans. The magical substitution of Kenichi Yatsuhashi and the stupendous performance of Musah Ibrahim which won the thunderous roar of the fans after the game can simply not be forgotten. With just ten minutes to end the game, Hearts were still down by two goals to nothing. All hopes were lost but Kenichi reminded all that the Phobians slogan is ‘Never say die until the bones are rotten.’ He introduced an unknown figure, Musah Ibrahim, who became the significant object of the day and all you could here was ‘Arose Arose Arose.’ The Phobia spirit was back again and for once, one could simply say Hearts were the league champions in advance. Such moments can obviously not be forgotten.

WAFA demolishing of Hasaacas: Do you remember the score line between WAFA and Hasaacas at the Red Bull Arena? Well it ended 5-0 in favour of the academy boys. Before that game, Hasaacas had whipped newly promoted side Techiman City by 4-2 and had sent signals of troubling the academy boys at their own backyard. With Eric Bekoe on fire and Samuel Afful and Kwadwo Poku blistering with form, many expected a lot from Hasaacas in that game. But Samuel Tetteh, Charles Boateng and Martin Antwi were always ready for any opposition. In the end, Hasaacas returned to Takoradi with the highest score line, 5-0. That was when Samuel Tetteh scored the first hat trick of the season. I still remember this game. What about you?

Hearts 2-I win over AshGold: Another great moment of the just ended league is the Hearts of Oak 2-1 triumph over AshGold at the Obuasi Len Clay Stadium. Before that game, Hearts had gone winless at the Len Clay Stadium for nine years so it was real test for Kenichi Yatsuhashi to prove a point against the ailing miners at their own backyard. And guess what? He did it. Hearts won by 2-1. The spell and the jinx have been broken. Hearts are victorious at Obuasi after nine years. It was a great afternoon for Cosmos Dauda as he capped his form with a brace in the game. What a game it was! I recall meeting Odotei Sowah and Frank Nelson who were all in joyous moods following that win not knowing the Phobians were planning of parting ways with their trainer. Hearts were simply phenomenal in the game.

Aduana Stars 3-2 win over Liberty in Dansoman: What a game it was? Aduana Stars rose from the poor start to register their first massive away win in the league and that came through a great comeback. Liberty had taken a 2-0 lead but the Fire Boys magically came back to score three goals in the second half to pick all three points. That marked the turning point of the title contenders. Yahaya Mohammed demonstrated leadership and explained the essence of experience with the killer punch. He scored the winner and all were shocked at Dansoman but the home fans later applauded Aduana Stars for their excellent performance. Well if you care to know, Ciaoba Aristica had returned by then.

Hearts 0-2 win over Medeama: For so many years, the Tarkwah & Aboaso Park was a no go area for Accra Hearts of Oak but the Kenichi magic triumphed over there as well. In actual fact, that was the second game the Japanese won to send signals of the great work he intended to do with the Phobians. The Rainbow Boys were held in the first half but the second half twisted the game in favour of the visitors. Cosmos Dauda and Eric Kumi found the back of the net for the visitors in front of thousands of vociferous Medeama fans. That was really a great moment for the Phobians but sadly, the dream could not continue after the first round as the master architect Kenichi Yatsuhashi exited the scene.

Hearts 1-0 win at Berekum Chelsea: Berekum Chelsea had been unbeaten at home for 43 matches and they were not expecting to surrender such a record any moment soon but they were forced by the Phobians to surrender. Samuel Yeboah’s last minute strike stole the show at the Golden City Park and amazingly, the home fans applauded the Phobians for that wonderful performance. The Phobians were on the 9th sky after winning against Chelsea and that added to their unbeaten run away in the first round.

WAFA smashing Hearts 3-0: I know the Phobian family do not want to remember this particular game but the academy boys want to. A brace from Komlan Abegniedan and one from Charles Boateng, all in the first half gave the Accra boys their first heaviest defeat of the season. The academy boys did not only beat their senior brothers from the capital, they made the Red Bull Arena a scary ground for them. The Hearts defenders were at sixes and sevens in the first half of the game and the academy boys took advantage to lash them. It was all fun for the people of Sogakope and even Phobian fans who understood the dynamics of the game. The 3-0 win over the Phobians is obviously a great moment in the league that can’t be forgotten. It shall remain in our memories till the end of time.

It’s amazing how Hearts of Oak have dominated the numerous events that made the major headlines during the active part of the season. Perhaps, the Phobians had something good under their sleeves but failed to show it to the world.