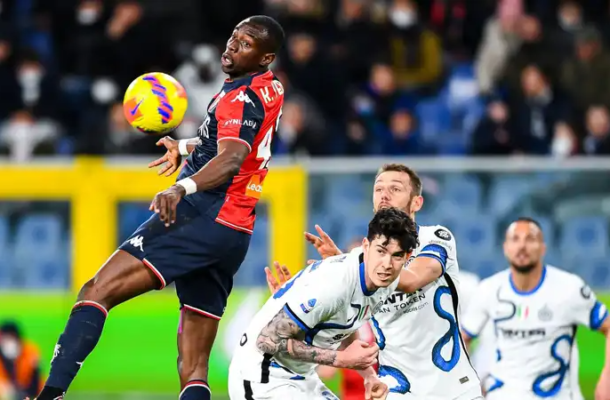 Dutch side Feyenoord Rotterdam are keen to rescue Ghanaian striker Kelvin Yeboah from the trenches of the Italian Serie B with a move.

The 22 year old Ghanaian who has chosen to play for Italy joined the Rossoblu in the January transfer window from Austrian side Sturm Graz but struggled to replicate the form that saw his side spend 6.5million euros on him.

Yeboah just like any player at the club struggled which ultimately resulted in their relegation from the Italia Serie B.

Genoa are still keen to continue with the talented striker as they look to bounce back immediately from the lower tier and would like the Ghanaian to lead their attack.

Feyenoord will have to pay more than the 6.5million euros Genoa paid to Sturm Graz in order to convince them to part with the Ghanaian.

The Dutch side have sold their inspirational Columbian forward Luis Sinisterra from to English Premier League side Leeds United for 21million pounds and are in need of a replacement with Kelvin Yeboah among their targets.

Last season he scored 11 goals with 5 assists in the Austrian Bundesliga in 18 matches before moving to Genoa in January where he failed to score a goal in 16 matches managing just two assists.