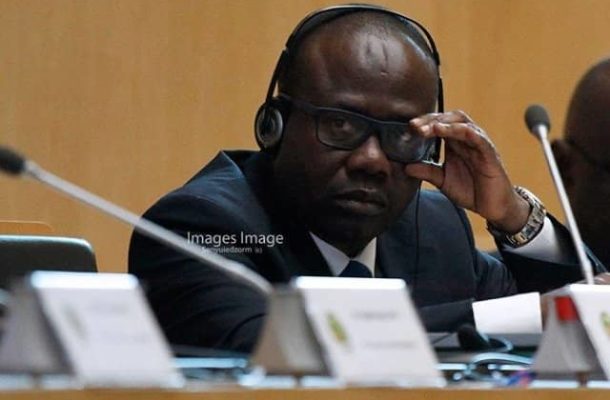 Obviously the breaking news of FIFA life ban on former GFA Kwesi Nyantakyi was met with many kinds of reactions in Ghana and beyond.

There are those who would celebrate upon hearing the bad news because their wish has been fulfilled.You can't begrudged them.For some people, it's an extremely bad day full of pain and agony.They must take heart.

There is a school of thought which believe that it  was vivid right  from the onset this brouhaha  that the so called undercover investigation was sponsored and orchestrated by some individuals who out of vengeance decided to bring down Mr.Kyantakyi regardless of the consequences.Their opinion though.

After reading the press release from FIFA on the life ban and did everthing humanly possible  to juxtapose FIFA's decision as against decisions they took against former FIFA President,Sepp Blatter and Michel Platini,former UEFA President over breaches of ethics including conflict of interest and dereliction of duty over 2 million Swiz Francs (£1.35 m),discribed as "disloyal payment" from Blatter to Platini.Platini was FIFA's consultant under Blatter from 1998-2002.Both Blatter and Platini were never given life ban but eight years ban apiece.

Jerome Valcke,Former FIFA Secretary General who was alleged to have misused  FIFA's  expenses and latter found guilty and after investigation was slapped with 10years ban and not life ban.

Even our own African compatriot from Zambia(Former Zambia FA President) Kalusha Bwala was just given two years ban after he  was also alleged to have received a gift of $100,000 from Qatar for helping them to snatched the hosting of FIFA 2022 from the jaw of  some influential countries in the world.Accusations of corruption have been made relating to how Qatar won the right to host the global football event.

I really find it a bit complicated to compare and contrast the aforementioned cases to that of Kwesi Nyantakyi who was not alleged to have misused any funds,involved in any money laundering,collected any bribe or was induced with money in exchange for any contract as it were.

The evidence before the FIFA adjudicating chamber of the independent committee was a controversial undercover investigative piece  conducted by a controversial investigative Journalist  alleging that Mr.Nyantakyi accepted a bribe of $65,000.
According to Kwesi Nyantakyi the money presented was $40,000 as part of the refund of  his airfare and accomadation bill  he was asked to pre-financed by the so called potentail sponsors of Ghana Premier League.

According FIFA they have banned Kwesi Nyantakyi  for life over such illogical  means full of deception and a clear situation of SET-UP from taking part in all football related activities.

By their release,the ban follows after investigations by the FIFA Adjudicating Chamber of the Independent Ethic Committee in the conduct of Nyantayi who was captured in a controversial expose by Anas Aremeyaw Anas and in addition fined him 500,000 Swiss Francs($50,000).

The Adjudicating Chamber found Kwsesi Nyantakyi guilty of heavily violated of Article 19(conflict of interest),Article 21(Bribery and corruption) and Article 22(commission) of FIFA  code of ethics.

My confusion keeps escalating as I end this piece because a clear set-up by my estimation attracted three articles and those who were caught red-handed receiving monies,misusing FIFA expenses,disloyal payments and what not, their punishments were just a flash punch as it were.

I respectfully want Nyantakyi to appeal the verdict to help him seek for redress and  justice.He was indeed given a raw deal looking at the cases I have captured above.

Kwesi Nyantakyi should take heart and be grateful to his Lord for what has happened to him because for any one to used set-up as means of destroying you in such a manner,only God can judge and posterity will make the valid  judgement one day.

There are countless individuals who were falsed to swallow a bitter pill.It is well and good because life is war and full of troubles.Keep hope alive and remember your compatriot Nyantakyi in your prayers becauae this can't be good moment for a friend,a brother,loved one and not even your worst enemy.
We need to love each other with clean hearts,sincerely,unconditionally and sympathy.

Nigeria Government dropped all cases against Amaju Pinnick,President of Nigeria Football Federation(NFF) when the chance came for him to take over the CAF 1st vice president after the exit of

The question is what has been the role of our government and Ghanaians in General in preserving the dignity and the image of our country Ghana and that  our own compatriot?