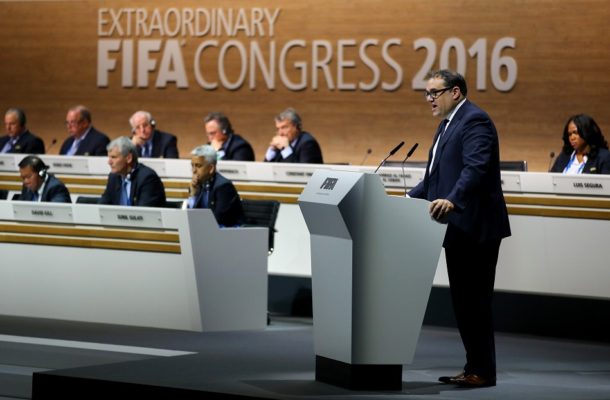 World football's governing body is considering expanding the World Cup to 48 teams and will make a decision by 2017, according to its president Gianni Infantino.

The Italian suggested that 16 of those teams would go home after just one knockout match, and the remainder of the tournament would be played, as now, with a 32-team group stage, followed by a knockout phase.

FIFA, which governs 211 nations, who all take part in World Cup qualifying, is expected to decide on the format for the 2026 tournament early next year.

"I think it's obvious it's not going to stay at 32 for 2026. I think it's going to change," said Canadian Montagliani who was elected CONCACAF president earlier this year, following the disgraced Jeffrey Webb as leader of North American, Central American and Caribbean football.
"If we listened to traditionalists we'd still have a 16-team World Cup. And there is a balance. You don't want 211 countries in a World Cup either.

"But the reality is that the World Cup is such a strong brand and inspires a lot of hope and inspiration in countries.

"For them just to dream about it, never mind get a piece of it, provides a lot of groundswell in those countries to promote the game.

"I think it's an opportunity and I think the president's right to really look at it.

"Should it expand? I think the answer is probably yes. I think now is, 'What's the format?"'
FIFA vice-president Victor Montagliani expects World Cup format to change
Montagliani also suggested football might still be blighted by corruption if Russia and Qatar had not been chosen to host the next two World Cups.

Russia will host the next tournament in 2018 and Qatar the 2022 event, with both nations winning the right in a controversial vote almost six years ago.

Since the December 2010 awarding, corruption has been exposed in the global game, with then-FIFA president Sepp Blatter among those now banned.

Montagliani, speaking at the Leaders in Sport conference in London, said: "If Russia and Qatar wouldn't have got these World Cups, would we be in this situation now with an opportunity to clean the game?