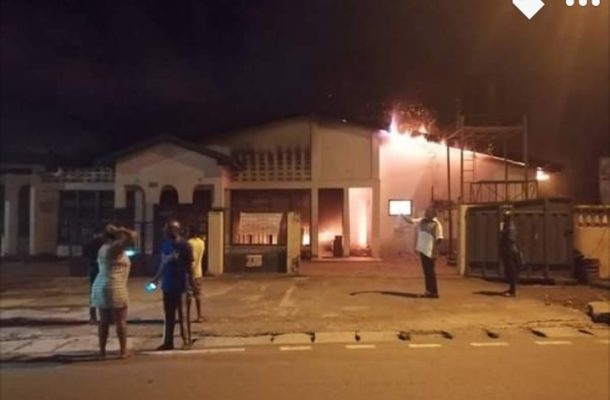 A fire that broke out at the Central Assemblies of God’s Church in the Volta Regional capital, Ho, has destroyed a number of properties.

Firefighters were called to the scene around 7:00pm on Wednesday to battle the huge inferno.

Some youth of the Church were reportedly conducting a Facebook live service at the premises when the fire started, Citi FM reported.

They were immediately evacuated after they were prompted of a smoke billowing from a section of the building.

Though investigations are yet to ascertain the cause of the fire, witnesses are pointing to an air conditioner affixed in one of the offices which may have started the fire.

Witnesses said two more fire engines were deployed to the scene after an earlier one had a tough time battling the blaze.

Together with the support of some youth of Ho Ahoe, the firemen managed to control the fire until two additional fire tenders arrived.

A number of offices attached to the church building have burnt beyond salvage.

Youth who were at the scene, however, helped to remove some chairs and sounds systems from the chapel before the fire could destroy anything there.

A Senior Pastor of the Church, Godson K. Bodza who was recently posted there was quoted by CNR as saying, ”The Church of God will bounce back with a super magnificent structure to the glory of God.”

He urged calm amongst the congregants and concerned youth who gathered at the church premise.

As at press time, fire officers were still battling to douse the fire.