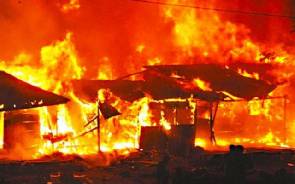 Fire gutted the offices of the Electoral Commission (EC) in Ahafo Ano North in the Ashanti region, destroying all documents belonging to the Commission.

The fire which is reported to have started around 3am Monday dawn also burnt completely, the Commission’s air conditioners and computers. Speaking to Citi News the Assistant Chief Fire Officer of the Ghana fire service in the Ashanti region, Semeko Fiadzo said the speedy arrival of the fire personnel helped to prevent the fire from spreading to other offices. “The fire was detected by the fire man on duty because the distance is not long.

He saw smoke coming from the roof of the building around 3:28am and by 3:30am they were at the scene. They were able to put it under control and finally extinguish at 4:00am. He further added that investigations has commenced into the incident to ascertain what might have caused the fire.

“We were able to prevent the fire from spreading to the other offices. There is one office which is being used as a store but it was the main office that was gutted by the fire. We have already begun our investigations.